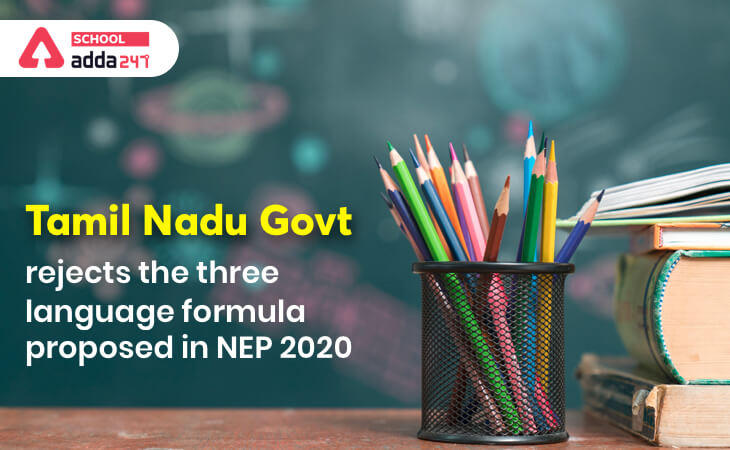 NEP 2020 Tamil Nadu Govt Rejects ‘3 Language Formula: One provision in the new National Education Policy, NEP 2020  has stirred a political storm in the state of Tamil Nadu. The NEP has proposed a three-language formula wherein the specific provision reads that, “The three languages learned by children will be the choices of States, regions, and of the students, so long as at least two of the three languages are native to India.”

This proposal laid down in the NEP 2020 has been opposed by the Tamil Nadu government. The Chief Minister of Tamil Nadu, Mr. Palaniswami stated that, “The three-language formula in the NEP is painful and saddening. The Prime Minister (Narendra Modi) should reconsider the three-language policy.” He further added that, “Tamil Nadu will never allow the Centre’s three-languages policy. The state will continue with its dual language policy.” He also stated that the decision on the above matter should be allowed to be made by the state governments in respective states.

All Political Parties in Tamil Nadu Oppose The Decision

The Chief Minister was forced to make a statement on this issue after a scathing attack by the opposition on the government. The principal opposition party DMK also stated that the government should stick to the two-language policy and reject the three-language policy proposed in NEP 2020. The opposition parties also asked the Chief Minister to pass a cabinet resolution in this regard. The chief minister then convened a high-level meeting wherein he discussed the matter with his colleagues and minister including the Deputy Chief Minister, O Panneerselvam, School education minister K A Sengotaaiyan, and Higher education minister K P Anbalagan.

Opposition to Imposition of Hindi and Sanskrit Under NEP 2020

The main point of contention regarding NEP 2020 in Tamil Nadu is that the above provision is being seen as an attempt to impose Hindi and Sanskrit on the Tamil people. The state has historically been against the imposition of Hindi and Sanskrit in school curriculum and the roots of the Dravidian movement are also found in this opposition which gave rise to many noted politicians in the state. The state government had opposed this provision when the NEP 2020 came for review and had written a letter to the Prime Minister, Mr. Narendra Modi registering the opposition of the ruling party as well as the opposition parties of Tamil Nadu.