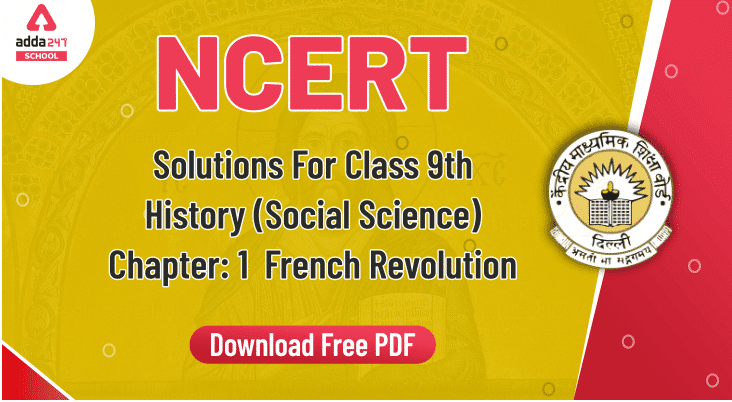 The NCERT Solutions For Class 9th History (Social Science) chapter 1 of India And the Contemporary World are given below. Students Should also check NCERT Solutions Class 9 for other subjects.

1. Describe the circumstances leading to the outbreak of revolutionary protest in France.

Answer: When King Louis XVI was sanctified as the new king, he came across an empty treasury. After being at war for a long time France’s financial resources were drained. They also had to look after the maintenance of a lavish court at the huge palace of Versailles. France helped thirteen American colonies in regaining their independence from Britain, which was their common rival. A billion livres saw their way to a debt that had already crossed 2 billion lives.

Lenders started charging 10% interest on loans. The French Government had to pay a considerable amount of interest payments alone from its budget. To maintain its army, the court, governmental offices, and universites funds were getting over. Raising taxes for revenue was not enough, as the French society was classified into 3 estates and only the 3rd estate was required to pay taxes. The 1st estate and the 2nd estate were not required to pay any taxes.

The was a rapid increase in the population of France too. This led to a massive growth in the demand for food grains. Production of grains could not meet the demand. So there was a rapid rise in the price of bread to cover the costings, which was the staple diet of a large part of the population. The labourers in workshops had fixed wages. However, the wages were not enough to sustain a livelihood. So the already existing bridge between the rich and the poor grew. All these factors contributed to the outbreak of the revolutionary protest in France.

Answer: French society was classified into 3 estates. The third estate saw many benefits. The third estate was made up of Peasants, artisans, Small peasants, landless labour, servants, big businessmen, merchants, court officials, lawyers etc. The people belonging to the 1st and 2nd estate were required to renounce their powers. These people had enjoyed certain benefits by birth. The revolution saw these people losing their benefits. The revolution aimed at an egalitarian society.

3. Describe the legacy of the French Revolution for the peoples of the world during the nineteenth and twentieth centuries.

Answer: The ideas of liberty and democratic rights are the fundamental pillars of the French revolution. These pillars soon spread to the rest of Europe during the nineteenth century and feudal systems were put an end to. Colonised people incorporated the idea of freedom from oppression into their revolutions to create a sovereign nation-state. Tipu Sultan and Ram Mohan Roy are two examples of individuals adopted the ideas that French revolution birthed.

4. Draw up a list of democratic rights we enjoy today whose origins could be traced to the French Revolution.

Answer: The following are the democratic rights being enjoyed even today but find their origins to the French Revolution: –

5. Would you agree with the view that the message of universal rights was beset with contradictions? Explain.

Answer: Even though they are known to be ‘Universal Rights’, women were conveniently not allowed to benefit from the basic fundamental rights. They could not enjoy equal rights that were given to men. They could not enjoy the right to liberty, property, security and above all, the defiance to bondage. During these laws were made, women did not have any representation. Women could not benefit the honours and public employment,  according to what they were capable of.

6. How would you explain the rise of Napoleon?

Answer: Napoleon Bonaparte anointed himself as the Emperor of France. He started destroying and capturing neighboring countries by declaring wars against them. He claimed himself to be a modernizer of Europe. The laws introduced by him included the protection of private property and a uniform system of weights and measures provided by the decimal system. Many of his laws carried the revolutionary ideas of liberty and modernization to the various parts of Europe. Even after he was dethroned, his laws had had a positive impact on people long after he was dethroned as an emperor, when he was finally defeated in the Battle of Waterloo.