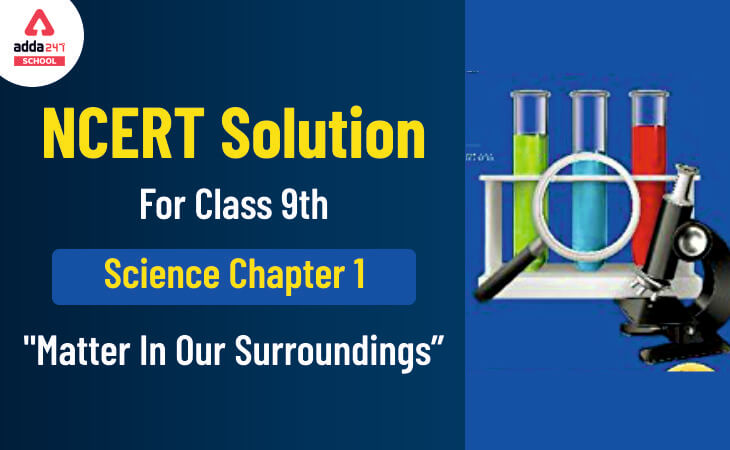 Answer: Matter is anything that can be touched. In other words, matter is an entity that physically exists in nature. In the provided options, the following are matter—

2. Give reasons for the following observation:

The smell of hot sizzling food reaches you several meters away, but to get the smell from cold food you have to go close.

Answer: At high temperatures, with the increase in heat, the molecules in a substance gain kinetic energy and exhibit fast movement resulting in diffusion. This diffusion is the reason behind the smell from hot foods that reaches you even if you are a few meters away.  In contrast to this, low temperatures restrict the movement of molecules in the air. The molecules remain intact and closely bind with one another, thereby, inhibiting diffusion. This is the reason why you can not smell medium hot or cold foods from a distance.

Answer: Characteristics of particles of matter are:

This is because solids have the highest density, followed by liquid, and then gases.

The particles present inside a gas have the negligible force of attraction but possess a high amount of kinetic energy, which permits them to flow and move freely in all possible directions. Therefore, these particles are in constant motion. Neither do they have fixed volume nor any fixed shape. Therefore, when placed in a vessel, it fills the vessel and takes its shape.

Therefore, it has got a fixed mass, volume, and shape.

The particles present in the air which is essentially gas has the negligible force of attraction and large empty spaces between the molecules, whereas a block of wood which is essentially a solid has a high force of attraction and tightly packed molecules which makes it easier for us to move our hand through air’s empty spaces but not a solid block of wood, which only a karate expert could do.

Even though solids tend to have a higher density than water due to its high force of attraction and closely packed molecules, which make it very dense, ice contains small pores when water freezes to change its form to ice, which creates several empty spaces inside of it. As a result, the volume of ice becomes greater than water, and greater volume means lesser density. This leads to the density of ice becoming lesser than that of water and allows it to float on ice.

Answer: As we all know 0°C=273K, this can be used to convert the Kelvin scale to Celsius scale.

2. What is the physical state of water at:

A desert air cooler works by initiating evaporation of water (on cooler pads) which, in turn, cools down the surrounding environment as the water when evaporates, absorbs the heat— latent heat of vaporization.

Answer: Evaporation absorbs heat as it is an endothermic process.

Answer: Surface area is directly proportional to the rate of evaporation.

Evaporation becomes faster with an increase in the surface area. When the hot tea from the cup is poured into a saucer, it cools down quickly due to the rise in the evaporation rate in the wide saucer.

Answer: In summer, people prefer wearing light coloured cotton clothes to enhance the rate of evaporation. Light colours absorb less heat and reflect more heat. The cotton clothes are porous and efficiently absorb the sweat. The absorbed sweat is exposed to the outer atmosphere resulting in the evaporation that lowers the temperature on the body.

(a) Naphthalene balls disappear with time without leaving any solid.

(b) We can get the smell of perfume while sitting several meters away.

Thus, when the bottle of perfume is opened, then the liquid perfume changes quickly into vapours. The perfume vapours move very rapidly in all directions in the air, mix with its particles, and, hence, spread with the air in the whole room.

Solids have the highest force of attraction, followed by a liquid, and then the gas has the least attractive forces. Therefore, the particles of solid are tightly packed, and the particles of gas are free to move.

25°C is the normal room temperature; therefore, the water exists in liquid form.

100°C is also known as the boiling of water. When the water reaches this point of temperature, it starts boiling and starts turning into vapours. Thus, at this point, water is in both liquid and gaseous states.

(a) Water at room temperature is a liquid.

(b) An iron almirah is a solid at room temperature.

Every substance has some forces of attraction between its particles that hold them together. It is essential for a substance to overpower the forces of attraction amongst its particles in order to change its state. This can be facilitated with the help of external heat that can, in turn, be utilized to overcome the attraction force amongst the particles while there is a change in its state. Latent heat is the heat energy that needs to be supplied in order to ensure a change in the actual state of a substance. As it is a ‘hidden’ heat, latent heat does not result in an actual change in the temperature because it is hidden in the substance that is experiencing a change in its state.

When water changes into steam, it absorbs latent heat, but when steam condenses to form water, an equal amount of latent heat is given out. It has been found that the burns caused by steam are much more severe than those caused by boiling water though both of them are the same temperature of 100°C. This happens due to the fact that in steam, there is hidden heat in the form of latent heat, which is not present in boiling water. Consequently, when steam touches the skin and therefore condenses, it gives out a larger quantity of heat as compared to the boiling water at the same temperature. Therefore, as steam gives out more heat, the burns caused by it are also severe.