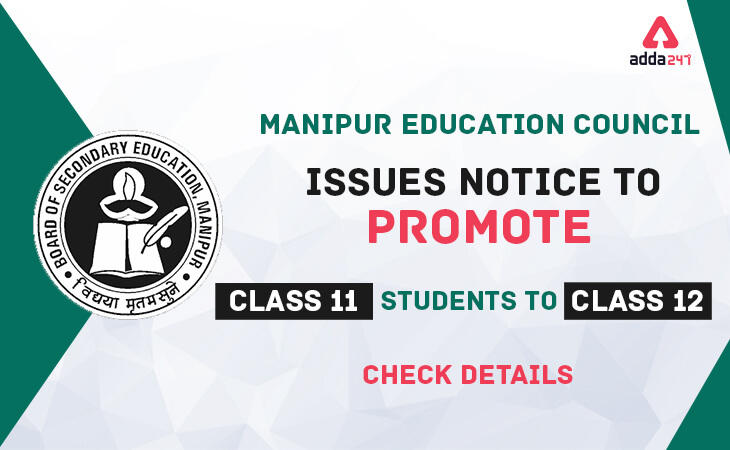 Due to the ongoing nationwide lockdown due to the Coronavirus pandemic, all the educational institutions and schools across the country have been closed. As the schools are not expected to be open before the month of July, the future of students has been hanging in jeopardy. Putting an end to the anxiety of class 11th students, the Council for Higher Secondary Education Manipur (COHSEM) has instructed all the higher secondary schools and colleges in the state to promote class 11th students to class 12th immediately.

An official notification in this matter has been issued by Ch Biren Singh, Secretary, COHSEM, wherein all the schools and colleges have been instructed to submit the tabulation sheets prepared to the council, latest by 13th May 2020. The notification was issued by the council after the decision taken by the state government during a cabinet meeting on 20th April 2020.

As per the instructions of the council, the promotion will be given only to those students who have their admit cards and will be based on their performance in the internal assessment tests conducted by the respective institution. This decision holds significant importance as the students, and their parents were left confused after the examinations had to be canceled midway due to the nationwide lockdown as a result of the COVID 19 pandemic.

The examinations for class 11th students were originally started on 17th February and were to be completed by 26th March 2020. But the examination was suspended on 19th May 2020 after questions of five subjects started doing rounds on the social medial. The subjects whose questions were leaked were Manipuri, Chemistry, Physics, and Biology. Thereafter an FIR was also lodged, and the accused, who worked with a private institution, was apprehended and sent to judicial custody.

Thereafter a probe committee was formed to look into the reasons behind the leaking of the questions in social media and suggest necessary changes for the future. While the committee was conducting its probe, the council rescheduled the examination for the remaining papers on 9th April 2020. But when the Prime Minister announced the nationwide lockdown from 25th March 2020 for an initial period of 21 days and then for another 19 days, the examinations had to be postponed indefinitely.

Now that the decision has been taken by the state government and has been notified by the Council for Higher Secondary Education Manipur, the students can now breathe a sigh of relief and start focusing on the upcoming (curtailed) academic session and start their preparations accordingly.