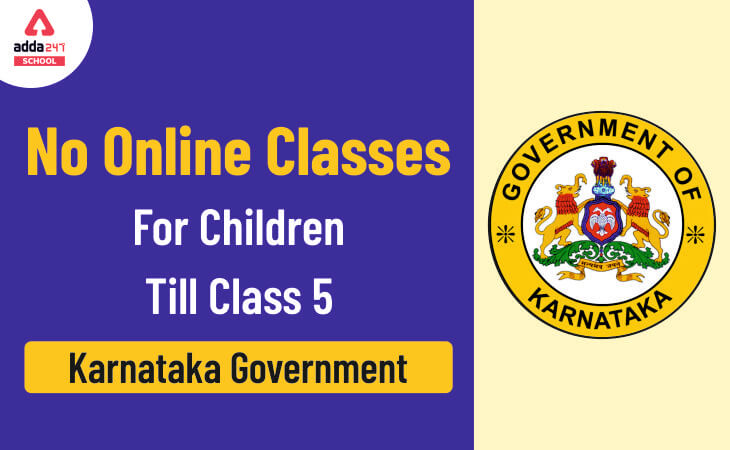 Karnataka School News: There is an extremely important update for all the school students in Karnataka who had been continuing their education during the lockdown with the help of the online classes being conducted. After receiving several complaints from parents regarding the conduct of online classes, the state government has decided to discontinue the online classes for students studying in the kindergarten till class 5th. The government has further directed the schools to stop collecting additional fees from students in the name of online classes. While interacting with the media, the primary and secondary education minister of Karnataka, Mr. S Suresh Kumar stated that “Two decisions have been taken-online classes for LKG, UKG and primary classes should be stopped immediately. Also, collecting fees in the name of online classes should be stopped immediately.”

He further informed the media that this decision has been taken after detailed discussions with the management at private educational institutions and other officials after receiving several complaints regarding the online classes. He stated that there was a consensus that online classes can not be considered as an alternative to physical classes. Check | Yoga Olympiad 2020: NCERT To Hold Yoga Olympiad Online This Year, Check Details

Engaging Student Is a Priority

The minister further informed the reporters that the government is contemplating different ways to engage the students as presently there is no clarity over when the schools will be reopening. There has been extreme pressure being put on the government by parents and different associations that what purpose will online education classes being conducted for kindergarten students to be serving.

He further stated that a committee has been formed under the leadership of renowned educationist Prof M K Sridhar, which will be preparing guidelines on how to engage the students and enhance their knowledge.

He also added that previously the government had issued a circular to private educational institutions to not hike the school fees as the parents are suffering huge financial burden during the lockdown. The appeal has been made to the schools on humanitarian grounds and if they reduce the amount of the fee, it will indeed be a welcome move. Check Also | NIRF Ranking 2020: NIRF Engineering Rankings, Top Ranking List Check Here

When asked regarding the upcoming SSLC Exams 2020, the minister added that the decision to conduct the SSL Exams 2020 from 25th June 2020 onwards has been taken after detailed discussions with various stakeholders. He stated that “From June 25 to July 4, the exams will be held, and safety of children is our utmost priority and we are taking all necessary steps in this regard.

Preparations for the exams are on in all districts, micro-level planning is being done.” He also informed the media that the health department, home department, and transport department have joined hands and will do everything possible to ensure the safety of students and the teachers during the SSL Exams 2020 in the state. Students have been advised to follow the detailed guidelines issued by the government for their safety. Check Also | School News: Schools And Colleges In Odisha To Remain Shut Till July End – Odisha Govt