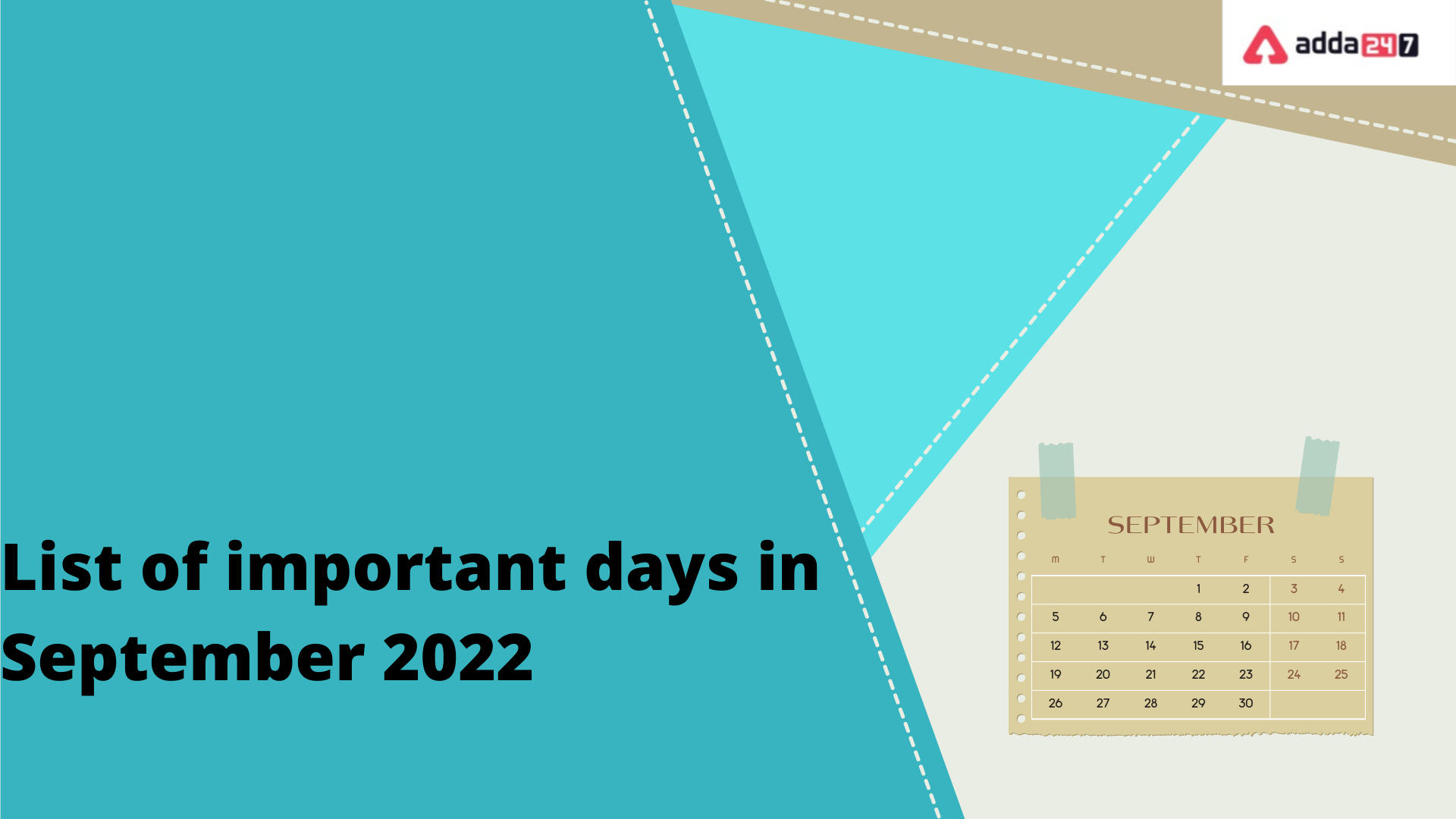 Every year, thousands of candidates start preparing for a variety of competitive examinations for departments like teaching, the railroads, banks, and the military. Every candidate preparing for the next exam must be aware of the Special Days observed at the National & International level for the General Knowledge part. In addition to the syllabus, current affairs, the key days and calendars carry equal importance. We have listed every significant day and date in September 2022 in this page.

The calendar of days and activities for September 2022 is provided here. The students who are studying for their competitive or government exams will find this comprehensive list of Special Days & Dates in September to be very helpful.

The annual National Nutrition Week is observed from September 1 through September 7. The celebration’s goal is to increase public awareness of healthy eating habits and active living. National Nutrition Week 2021’s theme this year is “Feeding intelligently right from start.” The Indian government started the “POSHAN ABHIYAN” campaign in 2018 to inform the public about nutrition and health.

Since 2009, September 2 has been observed worldwide as World Coconut Day. Building a Safe Inclusive Resilient and Sustainable Coconut Community Amid COVID-19 Pandemic and Beyond is the subject of World Coconut Day in 2021. The purpose of the holiday is to promote awareness of coconut consumption and its health advantages worldwide.

September 5 is the International Day of Charity.

On September 5, which is Mother Teresa’s death anniversary, it is declared International Day of Charity. The UN General Assembly proclaimed this day on December 17, 2012, and it has been observed ever since in Mother Teresa’s honor. She dedicated her entire life to giving back and doing good. Mother Teresa received the “Nobel prize for peace in 1979.”

Every year on September 14, India celebrates Hindi Diwas. On this date in 1949, the Indian Constitution Assembly declared Hindi written in Devanagari to be the national tongue. One of the most widely used languages worldwide is Hindi. 40% of residents both inside and outside the nation speak it as their first language.

Every September on the second Saturday, people around the world celebrate World First Aid Day. It is observed on September 11, 2021, this year. The topic of World First Aid Day in 2021, chosen by the International Federation of Red Cross and Red Crescent Societies (IFRC), is “First aid and road safety.” This day is observed to raise awareness of the value of first aid education and to make it more widely available in order to save more lives in times of emergency.

India’s Engineer’s Day is on September 15.

Every year on September 15, engineers’ day is observed. Every year, this day is held to mark the anniversary of the birth of Sir Mokshagundam Vishweshvaraya, a pioneer in engineering and recipient of the Bharat Ratna Award. Since 1968, this holiday has been observed to honor the role that engineers have played in the nation’s growth.

15 September is the International Day of Democracy.

Every year on September 15, people worldwide celebrate International Day of Democracy. A UN General Assembly resolution adopted in 2007 declared it. The purpose of the day is to inspire governments to fortify and deepen democracy.

World Ozone Day or International Day for the prevention of the Ozone Layer is observed each year on 16 September. The objective of this day is to spread awareness among the people about the depletion of the Ozone layer and search for possible ways to preserve it. The ozone layer protects life on earth by absorbing the UV rays of the Sun.

Every year on September 17, there is a global observance of World Patient Safety Day. “Safe maternity and newborn care” is the subject for World Patient Safety Day in 2021. This day is observed to raise awareness of patient safety and to encourage people all around the world to pledge their support for ensuring the safety of healthcare. WHO is urging all parties involved this year to “Act immediately for safe and dignified childbirth.

September 21 is the International Day of Peace.

Every year on September 21, there is a global day of peace. Recovering better for an equal and sustainable world is the topic of the 2021 International Day of Peace. By observing a 24-hour period of nonviolence and a cease-fire, the UN Assembly declared this day to strengthen the principles of peace.

The 22nd of September is designated as World Rose Day each year. Melinda Rose, who was diagnosed with the rarest kind of blood cancer when she was 12 years old, is remembered on this day each year. The goal of this day is to encourage those who have been impacted by cancer and to let them know they are not fighting this deadly disease alone.

The 23rd of September is International Day of Sign Languages.

The 25th of September is World Pharmacists Day.

The 25th of September is designated as World Pharmacists Day each year. this year’s central theme. Always trust the pharmacy with your health. The day is intended to honor the contributions made by pharmacists worldwide.

September 26 is World Day of the Deaf.

On September 26th of each year, we observe World Contraception Day. To raise awareness of contraception and empower young people to make educated decisions about their sexual and reproductive health, this day was created.

The 26th of September is World Environmental Health Day.

The 27th of September is designated as World Tourism Day each year. World Tourism Day in 2021 will focus on “Tourism for Inclusive Growth.” The purpose of World Tourist Day is to increase public awareness of the contribution that the tourism industry makes to uniting and bridging the global community.

Every year on September 29, the world celebrates heart health. The purpose of the day is to raise awareness of cardiovascular disorders. The World Heart Foundation created World Heart Day.

29 September is the International Day to Reduce Food Loss and Waste.

Every year on September 29, people around the world mark the International Day of Awareness on Food Loss and Waste Reduction. The Food Agriculture Organization has only ever observed this day twice.

The world celebrates International Translation Day every September 30. St. Jerome, a Bible translator who is revered as the patron saint of translators, is remembered on this day. The purpose of the day is to raise awareness of the translation industry among all foreign communities worldwide.

Question 1. When is Teacher’s Day Celebrated and Why?

Question 3. What Are the Important Days In September 2022?