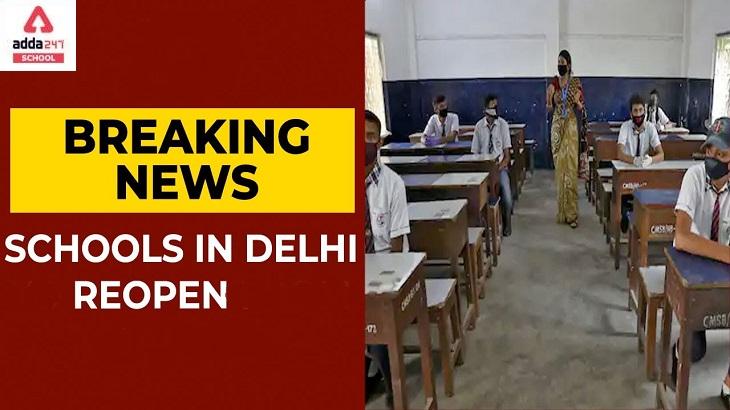 Delhi Schools reopen: According to reports, the air quality index has slightly improved in Delhi after it has gone through the worst, during the Diwali celebrations on Nov 4th and 5th. Schools and colleges were declared to be closed in the state after monitoring the air quality index.

Construction work was halted and now the latest reports state that Delhi schools and colleges will reopen from November 29th as the air quality index has improved. This information was conveyed to the general public by the Education Minister, Gopal Rai.

Delhi Schools and Colleges were shut due to Air Pollution

The air quality index worsened in Delhi after the Diwali celebrations on November 4th and 5th. The schools and colleges were shut by the government for 10 days amid the Delhi Pollution. Although the air quality has slightly improved in the state, it is yet in the “very poor” category.

Toxic air also continues to blanket the neighbouring cities too. All the government offices too will be reopening from 29th November, Monday. All the staff members are requested not to operate their private vehicles and instead resent to the public transport given especially for the government employees by the state government.

Special bus services will be available for all the employees. Employees of different offices which are in close proximity too can use the same public transport instead of using two different ones.

The city saw a series of curbs due to the lack of proper air quality. Curbs were imposed on the general public which made the hustled life of the city, come to a standstill.  The toxic smog enveloped the national capital resulting in deterioration in the health of a few elderly people. The Supreme Court of India had given stern remarks over the air pollution crisis as it entered the third week.

As quoted by the Judges of Supreme Court, “This is the National capital of the country. Look at the signal we are sending to the world. You have to predict the situation based on statistics. And take anticipation so that the situation does not go severe. Even if the pollution level goes down now, we will continue to hear this case and issue directions”.

Delhi Schools and Colleges will be reopening from November 29th. Students have been suffering since the closure of physical classes after Diwali as the Term 1 exam for Classes 10th and 12th are knocking on the door.

This year the Central Board of Secondary Education had decided to conduct the Board Exams in two terms as it faced difficulty last year due to the sudden surge in the number of covid cases, across the country.

The students will be appearing for the Term 1 exams with a reduction in the overall syllabus and a change of examination pattern. Students have already been tensed due to the First term board exams, and the poor air quality index of Delhi added to the burden.

It was speculated that the term 1 exams might be cancelled as the schools have been shut down, but putting all expectations to rest, on Wednesday the government declared that the schools and colleges of Delhi will soon be reopened.

When are the schools of Delhi reopening?

The schools and colleges of Delhi are reopening from 29th November, Monday.

What was the worst air quality index faced by Delhi?

What do we mean by smog?

Dirty and poisonous air that can blanket a city is known as smog.

What is the air quality index?

Can a degraded air quality index affect the lives of individuals residing in Delhi?

Yes, degraded air quality index can affect the lives of individuals residing in Delhi, in various ways such as breathing difficulties, heart problems and lung issues.