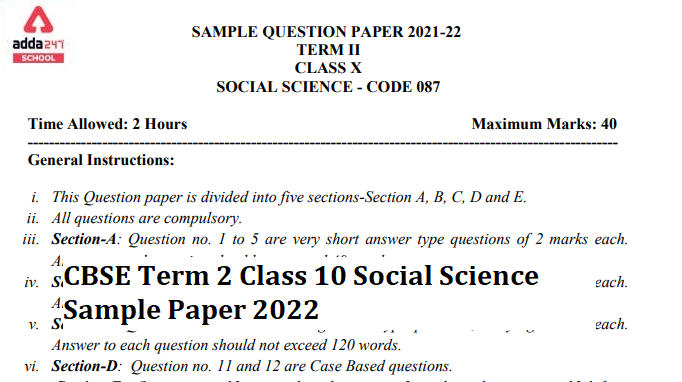 The Central Board of Secondary Education is going to conduct CBSE Term 2 Exam for Class 10th and 12th from 26th April 2022. The students studying in CBSE Class 10th must solve the CBSE Class 10 Term 2 Social Science Sample paper given on this page to assess their preparation. This year CBSE is conducting board exams in two terms such as Term 1 and Term 2 instead of taking exams annually.

In CBSE Term 1 examination, CBSE has asked multiple-choice questions but the exam pattern of CBSE Term 2 will be different. In CBSE Term 2 examination, the CBSE will ask descriptive questions. In this article, we have given the CBSE Class 10 Term 2 Social Science Sample paper and Class 10th exam pattern. The students studying in class 10 of the Central Board of Secondary Education must go through the complete article to get the best out of it and bookmark this page to get all the latest updates from CBSE.

Section A: Questions 1–5 are very short answer-type questions with a maximum of two marks each. Each question should be answered in no more than 40 words.

Section B: Questions 6-8 are short answer-type questions with a maximum of three marks each. Each question should be answered in no more than 80 words.

Section C: Questions 9-10 are long answer-type questions with a maximum of five marks each. Each question should be answered in no more than 120 words.

Section D: Question no. 11 and 12 are Case-Based questions.

Q.1 How did the Non-Cooperation Movement unfold in the cities and towns of India?

Ans. (i) The movement started with middle-class participation in the cities.

(v) The council elections were boycotted in most provinces except Madras.

(vii) Any other relevant point (Any two points)

Q.2 Why is tourism considered a trade?

Ans. (i) Foreign tourists’ arrival in the country contributing to foreign exchange.

(ii) Many people are directly engaged in the tourism industry.

(v) Any other relevant point. (Any two points)

Q.3 Differentiate between one party and two party system.

Ans. A. One Party System

(i) Countries where only one party is allowed to control and run the government are called one party system.

(ii) Eg. In China only Communist Party is allowed to rule.

(ii) The United States of America and United Kingdom are examples of Two Party System.

Q.4 State the role of Reserve Bank of India.

Ans. (i) In India, the Reserve Bank of India issues currency notes on behalf of the Central Government.

(ii) The RBI supervises the functioning of formal sources of loans.

(iv) The RBI sees that the banks give loans not just to profit-making businesses and traders but also to small cultivators.

(v) Any other relevant point. (Any two points)

Q.5 Read the data in the table given below and answer the questions that follow:

(v) Any other relevant point

Q.7 Why is production and consumption of steel considered as an index of a country’s development?

Ans. (i) The steel products are used as a raw material in different industries. (ii) It is required for export.

(iv) Any other relevant point.

Q. 8 Why do most of the rural households still remain dependent on informal sources of credit?

Ans. (i) Limited availability of Banks in rural areas.

(ii) People in the rural areas face problem with regard to documentation.

(iii) Absence of collateral is one of the major reasons which prevents the poor from getting bank loans.

(iv) Rural people get easy loans from the richer households through informal ways.

(v) Any other relevant point. (Any three points)

Q.9 How do Self Help Groups help borrowers to overcome the problem of lack of collateral? Explain.

(i) People can get timely loans for a variety of purposes and at a reasonable interest rate.

(ii) SHGs are regular in their savings which can be used as monetary help.

(iii) Members can take small loans without collateral to meet their needs.

(v) Any other relevant point. (Any three points)

Q.10 “Tribal peasants interpreted the message of Mahatma Gandhi and the idea of swaraj in another way and participated in the Non-Cooperation Movement differently.” Justify the statement.

Ans. (i) Spread of militant guerrilla movement in the Gudem Hills of Andhra Pradesh.

(ii) They were against colonial policies.

(iii) Their livelihood was affected and their traditional rights were denied.

(iv) Their leader Alluri Sitaram Raju was inspired by the Non-Cooperation Movement and persuaded people to wear khadi and give up drinking.

(v) He wanted liberation by the use of force.

Q.11 Examine the role of Political Parties in a democratic country.

(ii) Parties play a decisive role in making policies for the country.

(iii) They recruit leaders and train them.

(iv) Parties that lose the election form the opposition.

(vii) Any other relevant point (Any three points)

Q.12 “Democracy’s ability to generate its own support is itself an outcome that cannot be ignored”. Support the statement with examples.

Ans. (i) Democracy ensures that decision making will be based on norms and procedure.

(ii) Every citizen has the right and means to examine the process of decision making.

(iv) People have the right to choose their rulers.

(v) Democracy gives its citizens the right to information about the government and its functioning.

Q.13 ‘There is an overwhelming support for the idea of democracy in South Asia.’ Support the statement with examples.

Ans. (i) Democratic government is peoples own government.

(iii) Countries want to elect their representatives by themselves.

(iv) Democracy provides dignity and freedom to its citizens.

(vi) Democracy is based on the idea of discussion and negotiation.

Q.14 Examine the role of Information Technology in stimulating the process of globalization.

Ans. (i) Technology has been changing rapidly.

(v) Computers have now entered almost every field of activity.

(vi) One can obtain and share information through internet.

Q.15 Assess the impact of globalization on India and its people.

Ans. (i) Globalization has resulted in more choices for the consumers

(ii) This has improved the standard of living of people

(iii) MNCs have increased their investments in industries such as cell-phones, automobiles, electronics, soft drinks, etc.

(iv) New jobs have been created.

(v) Some local companies that supply raw materials to MNCs have also benefited.

(vi) Some local companies have been able to invest in newer technology and production methods.

(vii) Globalisation has enabled some large companies such as Tata Motors, Infosys to emerge as multi-national companies.

(xii) Any other relevant point

Q.16 Read the given text and answer the following questions:

‘It is said of “passive resistance” that it is the weapon of the weak, but the power which is the subject of this article can be used only by the strong. This 4 power is not passive resistance; indeed, it calls for intense activity. The movement in South Africa was not passive but active … ‘Satyagraha is not physical force. A satyagrahi does not inflict pain on the adversary; he does not seek his destruction … In the use of satyagraha, there is no ill-will whatever. ‘Satyagraha is pure soul-force. Truth is the very substance of the soul. That is why this force is called satyagraha. The soul is informed with knowledge. In it burns the flame of love. … Nonviolence is the supreme dharma …‘It is certain that India cannot rival Britain or Europe in force of arms. The British worship the war-god and they can all of them become, as they are becoming, bearers of arms. The hundreds of millions in India can never carry arms. They have made the religion of non-violence their own …’

Q. Why did Gandhiji consider nonviolence as supreme dharma?

Ans. Gandhiji adopted nonviolence as a philosophy and an ideal way of life. According to him philosophy of nonviolence is not a weapon of the weak; it is a weapon, which can be tried by all.

Q. How was Gandhian satyagraha taken by the people who believed in his philosophy?

Ans. A satyagrahi does not inflict pain on the adversary; he does not seek his destruction. In the use of satyagraha, there is no ill-will.

Q. Why was Gandhian satyagraha considered as a novel way to resist injustice?

Ans. (i) One could win the battle through nonviolence.

(ii) This could be done by appealing to the conscience of the oppressor.

(iii) People – including the oppressors – had to be persuaded to see the truth, instead of being forced to accept truth through the use of violence.

(iv) Any other relevant point

Q. 17 Read the given text and answer the following questions:

Ever since humans appeared on the earth, they have used different means of communication. But, the pace of change, has been rapid in modern times. Long distance communication is far easier without physical movement of the communicator or receiver. Personal communication and mass communication including television, radio, press, films, etc. are the major means of communication in the country. The Indian postal network is the largest in the world. It handles parcels as well as personal written communications. Cards and envelopes are considered first-class mail and are airlifted between stations covering both land and air. The second-class mail includes book packets, registered newspapers and periodicals. They are carried by surface mail, covering land and water transport. To facilitate quick delivery of mails in large towns and cities, six mail channels have been introduced recently. They are called Rajdhani Channel, Metro Channel, Green Channel, Business Channel, Bulk Mail Channel and Periodical Channel.

Q. Examine the role of the Indian postal network.

Ans. (i) It has helped the country to engage in communication and social-economic development.

Ans. (i) Mass Communication is the medium which provides entertainment as well as creates awareness among the masses. It includes radio, television, newspapers, magazines, books, films etc. whereas Personal Communication is between person to person.

(ii) Any other relevant point

Q. Analyse the significance of communication for a nation.

Ans. (i) This is the age of communication using the telephone, television, films, and the Internet.

(ii) Even books, magazines and newspapers are important means of communication.

(iii) Various means of communication have connected the world closer

(iv) It is the source of entertainment and knowledge.

(v) Any other relevant point

Q. 18 On the given outline Political Map of India, identify the place marked as A with the help of following information and write its correct name on the line marked near it.

Ans. The place where Non Cooperation Movement called off due to violence. Ans. Chauri Chaura (UP)

Q.19 On the same given map of India, locate the following –

Q. Where can I get CBSE Class 10th Social Science Sample Paper 2022?

On this page, you will get CBSE Class 10th Social Science Sample Paper 2022.

The Central Board of Secondary Education will soon announce the CBSE Term 1 Result 2021-22 on its official website.

Q. What are the passing marks of the CBSE Term 1 examination?

The students must score 33% Marks in each subject to pass CBSE Term 1 Examination?

Q. What is the maximum make of CBSE Class 10th Social Science Paper 2022?