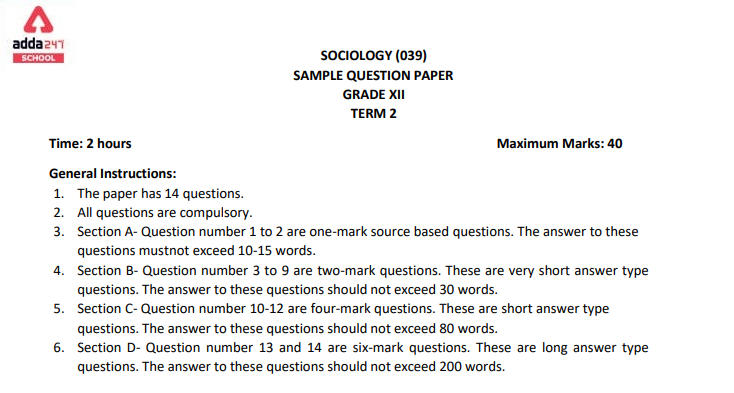 Section A: This section consists of one mark questions.

Section B: This section consists of two mark questions.

Q.1 A model of the South Asian colonial city The European town…had spacious bungalows, elegant apartment houses, planned streets, trees on both sides of the street,…clubs for afternoon and evening get togethers…The open space was reserved for…Western recreational facilities, such as race and golf courses, soccer and cricket. When domestic water supply, electric connections, and sewage links were available or technically possible, the European town residents utilised them fully, whereas their use was quite restricted to the native town. (Dutt 1993: 361)

No. When domestic water supply, electric connections, and sewage links were available or technically possible, the European town residents utilised them fully, whereas their use was quite restricted to the native town.

Q.2 Kumudtai’s journey into Sanskrit began with great interest and eagerness with Gokhale Guruji, her teacher at school…At the University, the Head of the Department was a well-known scholar and he took great pleasure in taunting Kumudtai…Despite the adverse comments she successfully completed her Masters in Sanskrit…. Source: Kumud Pawade (1938) Read the source and answer the following question. Do you think sanskritisation is a gendered process? Give a reason for your answer

Yes. She felt that the study of Sanskrit can help her break into a field that was not possible for her to enter on grounds of gender and caste. As she proceeds with her studies, she meets with varied reactions ranging from surprise to hostility, from guarded acceptance to brutal rejection.

Q.3 Agricultural productivity increased sharply because of the new technology. India was able to become self-sufficient in food grain production for the first time in decades. It was primarily the medium and large farmers who were able to benefit from the new technology.

i) What is subsistence agriculture?

When agriculturists produce primarily for themselves and are unable to produce for the market, it is known as subsistence agriculture.

ii) Who were able to reap the most benefits from Green Revolution and commercialisation of agriculture?

i) How can these movements be called autonomous?

The term ‘autonomy’ referred to the fact that they were ‘autonomous’ or independent from political parties as distinct from those women’s organisations that had links with political parties.

ii) Write about any one ideological change that was noticed in the autonomous women’s movement.

Q.5 Compare the impact of just-in-time for the company vis-à-vis the worker.

Q.6 Can we apply the distinction between old and new social movements in the Indian context?

Q.7 Often it is thought that imparting knowledge of ‘scientific’ farming methods will improve the condition of Indian farmers. Is this statement true? Give one reason for your answer.

Q.8 Differentiate between the organized and unorganized sector.

What are the social consequences of the long working hours in the IT sector?

Q.9 Labour is more free in an industrial society. How?

Q.10 Compare the experience of industrialization in the West with that of the Indian experience.

Q.11 Elucidate the phenomena of modernity.

‘Modernity’ assumes that local ties and parochial perspectives give way to universal commitments and cosmopolitan attitudes;

19th century reform initiated a period of questioning, reinterpretations and both intellectual and social growth. Using suitable examples, justify the given statement.

Q.12 Identify and discuss the plight of the various stakeholders in the Bombay Textile strike of 1982.

Q.13 Jharkhand is one of the newly formed states of India, carved out of south Bihar in the year 2000. Describe the social movement that led to the creation of this state.

Q.14 Show the relation between circulation of labour and feminization of agricultural labour force.