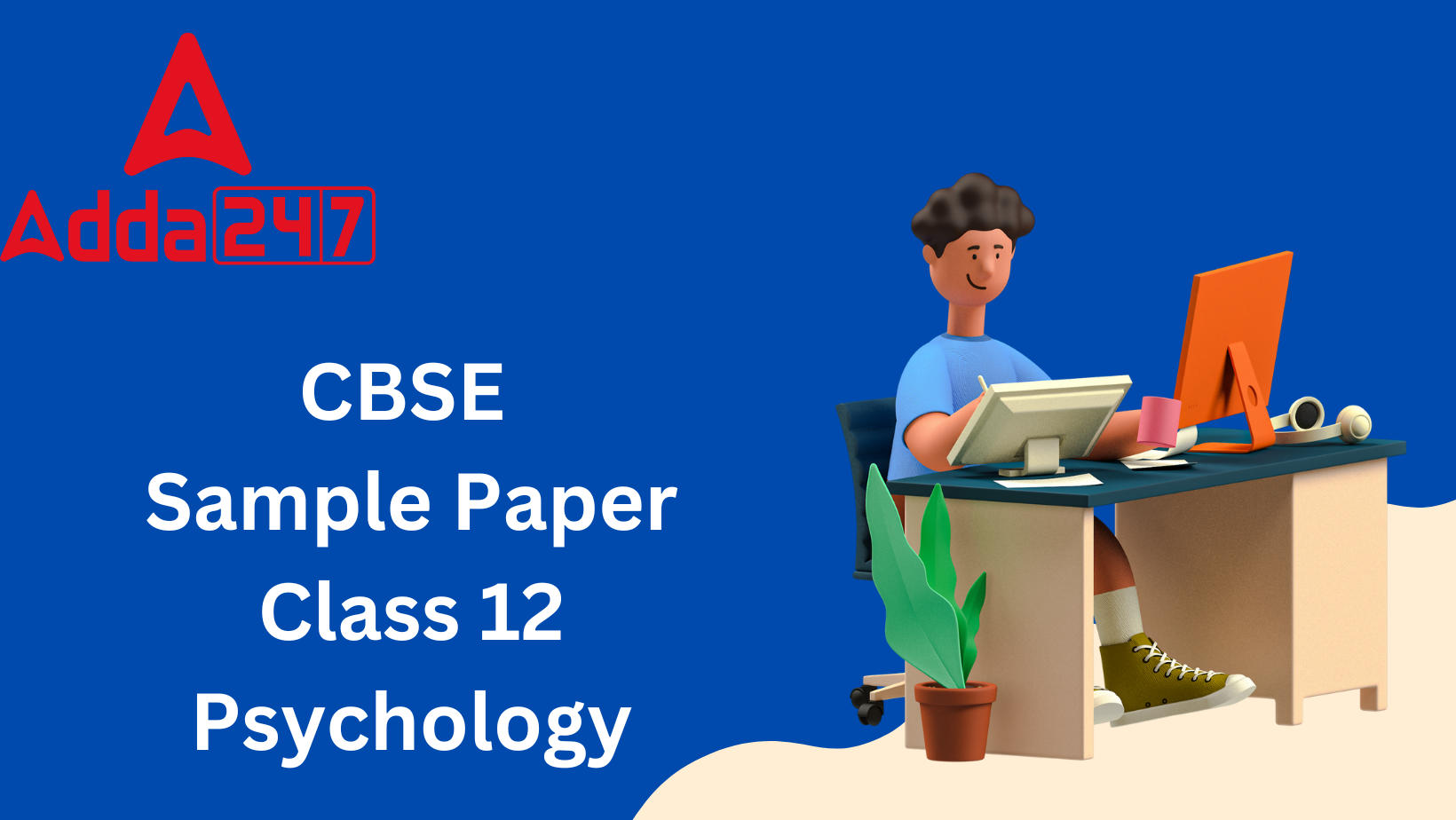 CBSE (Central Board Of Secondary Education)  has introduced Sample Papers for students of classes 10 and 12 Board. These Sample papers are on its official website. Students can also download the sample papers from here given below.
CBSE has introduced sample papers for all the subjects according to the layout of the question paper which CBSE is going to implement in this session 2022-23. This time CBSE has introduced only one term examination which is going to be conducted at the end of the year in March- February 2023.
In this article, we have covered the CBSE Class 12 Psychology Sample Paper. The students must solve CBSE Class 12 Psychology Sample Paper which is given on this page and bookmark this page to get all the latest updates from CBSE regarding CBSE Annual Exam.

3. According to the behaviourists, personality of an individual is the result of .

5. Which of the following are the dimensions of stress?

Assertion (A): The principle of reciprocal inhibition states that the presence of two mutually opposing forces at the same time will lead to the stronger force inhibiting the weaker one.

Reason (R): The principle of reciprocal inhibition is a procedure wherein the client learns to behave in a certain way by observing the behaviour of the therapist.

12. Amit throws temper tantrums every time he goes to the market with his He insists that they buy him a new toy every time. Identify the most suitable behavioural technique to modify this unwanted behaviour.

Assertion (A): We assign causes to the behaviour shown in specific social situations. This process is called attribution.

Reason (R): We are also interested in why people behave in ways they do. Therefore, we assign a cause to a behaviour.

16. Which one of the following is a feature of an attitude?

Assertion (A): Situation and circumstances in which one is placed influence one’s behaviour.

Reason (R): The situational influences are so powerful that individuals with similar personality traits respond to them in almost the same ways.

Resham has been overwhelmed by the quantum of work in her office. She has been advised some stress management techniques by her counsellor. What are the two techniques that you think would be helpful for her to manage stress?

An individual’s attitude may not always be exhibited through behaviour. When would there be consistency between attitude and behaviour? Explain.

Mukesh was given therapy that encouraged him to seek personal growth and actualise his potential. Based on these principles, explain the therapy that is being applied here.

Explain the characteristics of indirect techniques that are used to assess personality. Describe any two such tests.

Read the case and answer the questions that follow.

Malay, a student of class IX, was referred to a mental health clinic with complaints of stealing money, excessive lying, setting fire to household items, teasing young girls of the locality, and passing lewd remarks and making obscene gestures. The onset was about three years ago and has increased over the past eight months. Of late, he has started using alcohol and spending more time outdoors with friends of similar interest. School reports suggested gradual development of inappropriate behaviours such as openly defying rules in school, playing truant, instigating fellow students to pass silly remarks in class, disrespectful attitude towards elders ultimately resulting in frequent school absenteeism, mixing with local goons and excessive aggression. Further investigation revealed that family history is disturbed, relationship with father was extremely hostile and there were frequent conflicts amongst the family members. Birth and developmental milestones are normal.

The symptoms that Malay is exhibiting are different from the symptoms of Oppositional Defiant Disorder.  Justify this statement.

Read the case and answer the questions that follow.

Alfred Binet, in 1905, was requested by the French government to devise a method by which students who experienced difficulty in school could be identified. Binet and his colleague, Theodore Simon, began developing questions that focused on areas not explicitly taught in schools those days, such as memory, attention skills related to problem solving. Using these questions, Binet determined which were the ones that served as the best predictors of school success. Binet quickly realised that some children were able to answer more advanced questions than older children were generally able to answer and vice versa. Based on this observation, Binet suggested the concept of mental age or a measure of intelligence based on the average abilities of children of a certain age group. This first intelligence test is referred to as the Binet-Simon Scale. He insisted that intelligence is influenced by many factors, it changes over time, and it can only be compared in children with similar backgrounds.

36. Why do individuals differ in intelligence? Using examples, give reasons for your answer.

Q. Where can I get CBSE Class 12 English Elective Sample Paper 2023?

Q. What is the marking scheme of CBSE Class 12 Psychology?

Q.How many sample papers for Class 12 Board are sufficient for getting good marks?

Students should do at least 10 papers including CBSE Sample Papers 2022-2023 are sufficient to score better.

Stay updated with Adda247 to get more updates on Sample Paper!