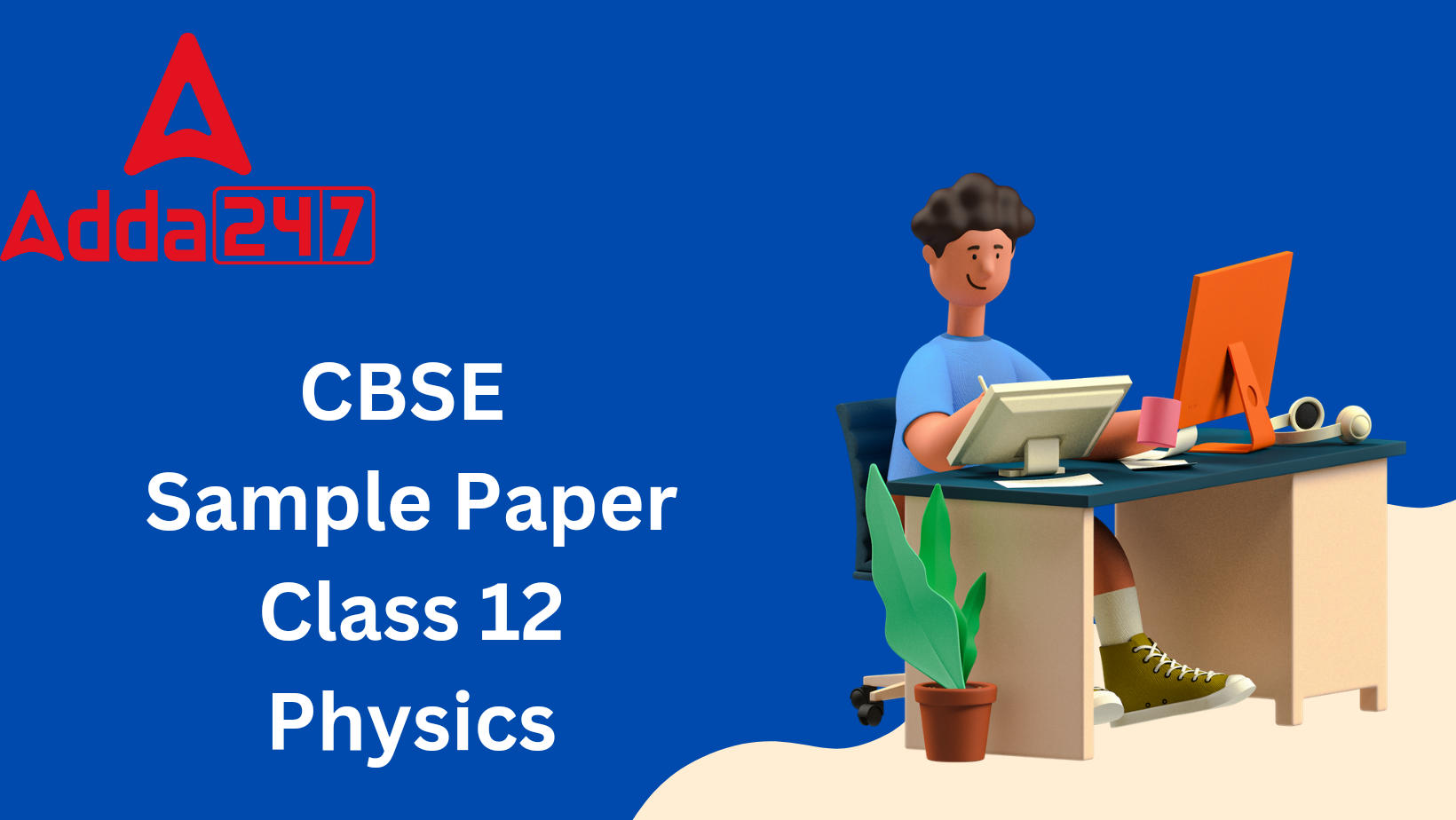 Q.1.According to Coulomb’s law, which is the correct relation for the following figure?

Q.2. The electric potential on the axis of an electric dipole at a distance ‘r from it’s centre is V. Then the potential at a point at the same distance on its equatorial line will be
(i) 2V
(ii) -V
(iii) V/2
(iv) Zero

Q.5.A long straight wire of circular cross section of radius a carries a steady current I. The current is uniformly distributed across its cross section. The ratio of the magnitudes of magnetic field at a point distant a/2 above the surface of wire to that at a point distanta/2 below its surface is
(i) 4 :1
(ii) 1:1
(iii) 4: 3
(iv) 3 :4
Q.6. If the magnetizing field on a ferromagnetic material is increased, its permeability
(i) decreases
(ii) increases
(iii) remains unchanged
(iv) first decreases and then increases
Q.7. An iron cored coil is connected in series with an electric bulb with an AC source as shown in figure. When iron piece is taken out of the coil, the brightness of the bulb will 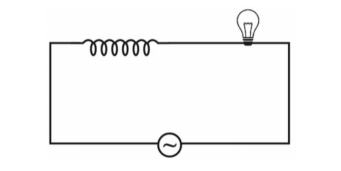 Q.9. A rectangular, a square, a circular and an elliptical loop, all in the (x-y) plane, are moving out of a uniform magnetic field with aconstant velocity 𝑣⃗ = v𝚤̂.The magnetic field is directed along the negative z-axis direction. The induced emf, during the passage of these loops, out of the field region, will not remain constant for
(i) any of the four loops
(ii) the circular and elliptical loops
(iii) the rectangular, circular and elliptical loops
(iv) only the elliptical loops
Q.10. In a Young’s double slit experiment, the path difference at a certain point on the screen between two interfering waves is 𝟏/𝟖 th of the wavelength. The ratio of intensity at this point to that at the centre
of a bright fringe is close to
(i) 0.80
(ii) 0.74
(iii) 0.94
(iv) 0.85

Q.15.The electric potential V as a function of distance X is shown in the figure. 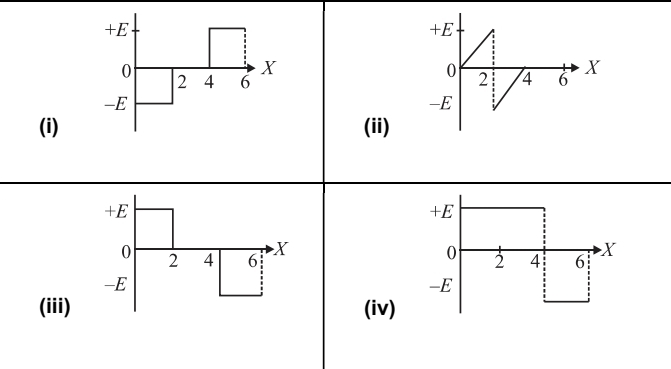 c) A is true but R is false
d) A is false and R is also false
ASSERTION(A): The electrical conductivity of a semiconductor increases on doping.
REASON: Doping always increases the number of electrons in the semiconductor

In an interference pattern observed in Young’s double slit experiment, if the separation (d) between coherent sources as well as the distance (D) of the screen from the coherent sources both are reduced to 1/3rd,then new fringe width remains the same.

SECTION B (2 marks each)

Q.19. Electromagnetic waves with wavelength
(i) λ1 is suitable for radar systems used in aircraft navigation.
(ii) λ2 is used to kill germs in water purifiers.
(iii) λ3 is used to improve visibility in runways during fog and mist conditions.
Identify and name the part of the electromagnetic spectrum to which these
radiations belong.Also arrange these wavelengths in ascending order of their
magnitude.
Q.20. A uniform magnetic field gets modified as shown in figure when two specimens A and B are placed in it.

Q.23. The figure shows a piece of pure semiconductor S in series with a variable resistor R and a source of constant voltage V. Should the value of R be increased or decreased to keep the reading of the ammeter
constant, when semiconductor S is heated? Justify your answer.

The graph of potential barrier versus width of depletion region for an unbiased diode is shown in graph A. In comparison to A ,graphs B and C are obtained after biasing the diode in different ways .Identify the
type of biasing in B and C and justify your answer.

Q.24.A narrow slit is illuminated by a parallel beam of monochromatic light of wavelength λ equal to 6000 Å and the angular width of the central maximum in the resulting diffraction pattern is measured. When the slit
is next illuminated by light of wavelength λ’, the angular width decreases by 30%. Calculate the value of the wavelength λ’.
Q.25.Two large, thin metal plates are parallel and close to each other. On their inner faces, the plates have surface charge densities of opposite signs and of magnitude 17.7 × 10-22 C/m².What is electric field intensity
E:
(a) in the outer region of the first plate, and
(b) between the plates?

Q.26. Two long straight parallel conductors carrying currents I1 and I2 are separated by a distance d. If the currents are flowing in the same direction, show how the magnetic field produced by one exerts an
attractive force on the other. Obtain the expression for this force and hence define 1 ampere.

Q.27. The magnetic field through a circular loop of wire, 12cm in radius and 8.5Ω resistance, changes with time as shown in the figure. The magnetic field is perpendicular to the plane of the loop. Calculate the current induced in the loop and plot a graph showing induced current as a function of time. 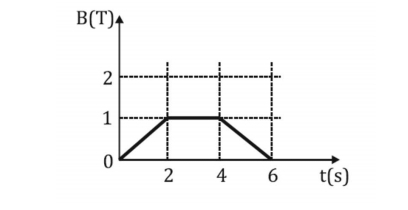 Q.28. An a.c. source generating a voltage ε = ε0 sin ωt is connected to a capacitor of capacitance C. Find the expression for the current I flowing through it. Plot a graph of ε and I versus t to show that the current is
ahead of the voltage by π/2.
OR
An ac voltage V = V0 sin t is applied across a pure inductor of inductance L. Find an expression for the current i, flowing in the circuit and show mathematically that the current flowing through it lags behind
the applied voltage by a phase angle of π/2. Also, draw graphs of V and i versus ωt for the circuit.

Q.29. Radiation of frequency 1015 Hz is incident on three photosensitive surfaces A, B and C. Following observations are recorded:
Surface A: no photoemission occurs
Surface B: photoemission occurs but the photoelectrons have zero kinetic energy.
Surface C: photo emission occurs and photoelectrons have somekinetic energy.
Using Einstein’s photo-electric equation, explain the three observations.
OR
The graph shows the variation of photocurrent for a photosensitive metal

(a)What does X and A on the horizontal axis represent?
(b)Draw this graph for three different values of frequencies of incident radiation ʋ1, ʋ 2 and ʋ 3 (ʋ 3>ʋ 2>ʋ1) for the same intensity.
(c) Draw this graph for three different values of intensities of incident radiation I1, I2 and I3 (I3> I2>I1) having the same frequency.
Q.30. The ground state energy of hydrogen atom is -13.6 eV. The photon emitted during the transition of electron from n=3 to n=1 state, is incident on a photosensitive material of unknown work function .The
photoelectrons are emitted from the material with the maximum kinetic energy of 9eV.Calculate the threshold wavelength of the material used.

OR
(a)Three charges –q, Q and –q are placed at equal distances on a straight line. If the potential energy of the system of these charges is zero, then what is the ratio Q:q?
(b)(i) Obtain the expression for the electric field intensity due to a uniformly charged spherical shell of radius R at a point distant r from the centre of the shell outside it.
(ii) Draw a graph showing the variation of electric field intensity E with r, for r > R and r < R.

Q.32.(a) Explain the term drift velocity of electrons in a conductor .Hence obtain the expression for the current through a conductor in terms of drift velocity.
(b) Two cells of emfs E1 and E2 and internal resistances 𝑟¹and 𝑟² respectively are connected in parallel as shown in the figure. Deduce the expression for the
(i) equivalent emf of the combination
(ii) equivalent internal resistance of the combination
(iii) potential difference between the points A and B.

OR
(a) State the two Kirchhoff’s rules used in the analysis of electric circuits and explain them.
(b) Derive the equation of the balanced state in a Wheatstone bridge using Kirchhoff’s laws.

Q.33. a) Draw the graph showing intensity distribution of fringes with phase angle due to diffraction through a single slit. What is the width of the central maximum in comparison to that of a secondary maximum?
b) A ray PQ is incident normally on the face AB of a triangular prism of refracting angle 600 as shown in figure.
The prism is made of a transparent material of refractive index 2/√3. Trace the path of the ray as it passes through the prism. Calculate the angle of emergence and the angle of deviation. 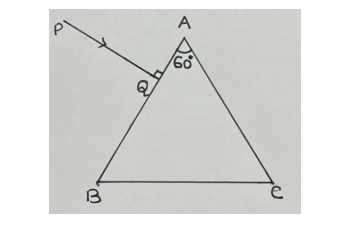 OR
a) Write two points of difference between an interference pattern and a diffraction pattern.
b) (i) A ray of light incident on face AB of an equilateral glass prism, shows minimum deviation of 30°. Calculate the speed of light through the prism. 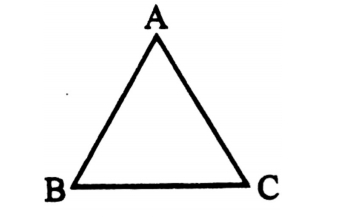 Q.34. Case Study :
Read the following paragraph and answer the questions.
A number of optical devices and instruments have been designed and developed such as periscope, binoculars,
microscopes and telescopes utilising the reflecting and refracting properties of mirrors, lenses and prisms. Most of them are in common use. Our knowledge about the formation of images by the mirrors and lenses is the basic requirement for understanding the working of these devices.
(i) Why the image formed at infinity is often considered most suitable for viewing. Explain
(ii) In modern microscopes multicomponent lenses are used for both the objective and the eyepiece. Why?
(iii) Write two points of difference between a compound microscope and an astronomical telescope
OR
(iii) Write two distinct advantages of a reflecting type telescope over a refracting type telescope.

Q.35. Case study: Light emitting diode.
Read the following paragraph and answer the questions
LED is a heavily doped P-N junction which under forward bias emits spontaneous radiation. When it is forward biased, due to recombination of holes and electrons at the junction, energy is released in the form of
photons. In the case of Si and Ge diode, the energy released in recombination lies in the infrared region. LEDs that can emit red, yellow, orange, green and blue light are commercially available. The semiconductor used for fabrication of visible LEDs must at least have a band gap of 1.8 eV. The compound semiconductor Gallium Arsenide –Phosphide is used for making LEDs of different colours. 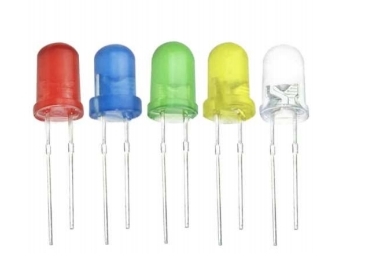 LEDs of different kinds
(i). Why are LEDs made of compound semiconductor and not of elemental semiconductors?
(ii) What should be the order of bandgap of an LED, if it is required to emit light in the visible range?
(iii) A student connects the blue coloured LED as shown in the figure.The LED did not glow when switch S is closed. Explain why ? 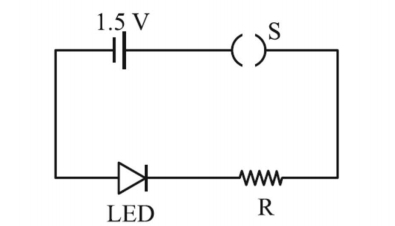 Q. Where can I get CBSE Class 12 Physics Sample Question Paper 2023?