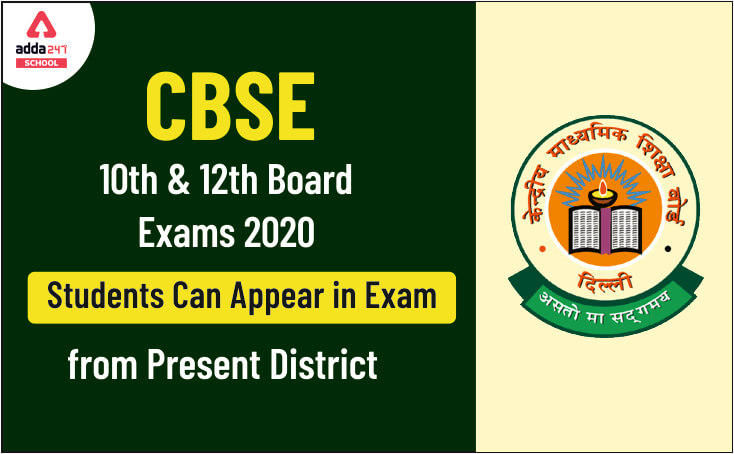 CBSE Board Exam 2020 Update: Now that the dates for the pending board exams for class 10th and 12th students have been announced by the CBSE, students are getting busy with their preparations. But there are some issues being faced by a certain section of students due to the problems caused by the nationwide lockdown. Check | CBSE Class 12th Improvement Results 2020 (Released): Apply For Verification

One of the biggest problems that the students had been facing was how to travel to their examination centres which are often located at faraway locations during all the lockdown restrictions. In order to answer this issue, the CBSE Board allowed the students to appear for their board exams at their own schools where they are enrolled in. Direct Link to Check | CBSE 12th Result 2020

But despite this decision made by the CBSE, a large section of students had been facing problems as they were now living in different districts as compared to the districts in which their schools are located. A large number of these students used to live in hostels in different districts and had to vacate the hostels due to the lockdown. Many such students are in fact living thousands of miles away from their schools.

Addressing the problems being faced by such students, the HRD minister earlier in the day tweeted that, “Students who are currently not in the same district as their board examination centre, we have a major announcement coming their way this evening. Stay tuned!.” This got the expectations of the students rising and finally, in the evening the HRD Minister announced the decision of the government to allow students residing in different districts to appear for their CBSE Board Exams 2020 in that district only without any need to travel to their school districts. Now, the government has finally made an important decision that will certainly bring a sigh of relief to such students. Check >> CBSE Exam Dates 2020: Class 10th and 12th Board Exams

CBSE Board Exams 2020: Students Must Get In Touch With Their Schools

CBSE Board Exams 2020: Focus Must Now Be On Preparations

Summing up his address to the students, the HRD minister congratulated the students and their parents for showing immense courage in the time of crisis and uncertainty. He asked the students to focus on preparations for their exams with the help of available learning resources, including eLearning platforms. In the coming days, students can expect certain important announcements regarding the CBSE Board Exams 2020. So, regularly visiting the CBSE website is highly recommended.