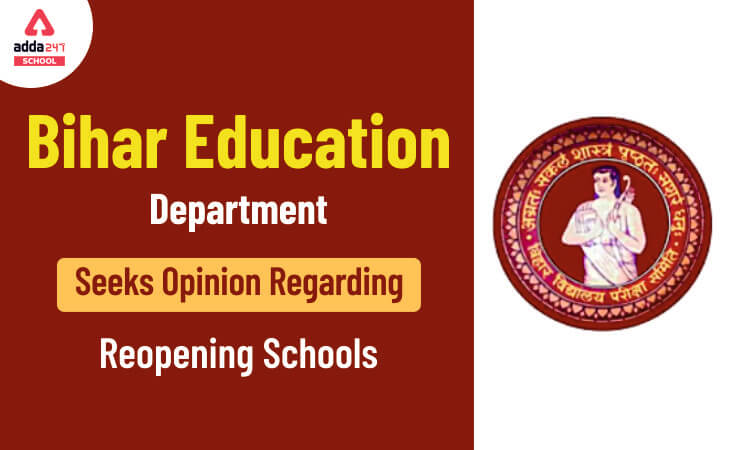 Bihar School News: All the educational institutions across the country have been shut even before the nationwide lockdown came into effect in the last week of March 2020. As the threat of the pandemic had been increasing steadily, state governments decided to extend the shutdown of the schools for the time being. This had an effect on the students because they were designed to continue their studies using whatever resources are available to them. But in the latest guidelines issued by the central government, indications have been given that educational activities might resume from the second phase of the unlock.

This has prompted the concerned authorities in Bihar to start working towards the resumption of the educational activities in the state. Mr. Giriwar Dayal, Director of Secondary Education, Bihar has issued letters to all District Education Officers in this regard. All DEOs have been instructed to get in touch with the concerned stakeholders which includes students, parents, teachers, guardians, and school administration, and gather their feedback regarding the resumption of the classroom sessions across the schools in the state of Bihar. Check | NCERT Solution For Class 9 Science Chapter 1 Matter In Our Surroundings

Details of The Guidelines Issued By The Bihar Education Department

The Director of Secondary Education has instructed all the District Education Officers across the 38 districts in the state to avoid meeting with the stakeholders in person. Instead, they have been instructed to collect feedback and suggestions from the stakeholders through WhatsApp or Email. The complete report has to be filed with the Director of Secondary Education latest by 7th June 2020. Check Also: NCERT Released Alternative Academic Calendar For CBSE 11th And 12th: HRD Minister Announces New Updates

The Director of Secondary Education has also suggested a ten-point query that must be carried out by the DEOs. The suggestions include inquiring regarding the starting of the new academic session, a maximum number of students to be allowed in a class, date of re-opening of the institutions, duration of the class, as well as the prayer assembly.

Decision Welcomed By The Private Schools And Welfare Association

The decision of the state government to start working towards re-opening the schools in Bihar has been welcomed by the Private Schools and Welfare Association. This association represents more than 25,000 recognized private schools in Bihar. When questioned regarding the response of the association towards the decision of the government, Mr. Shamael Ahmad, National present, Private Schools, and Welfare Association stated that “Schools should be opened in a phased manner. In the first phase, senior secondary sections should be reopened, followed by secondary sections, and so on. The seating arrangement should be planned to ensure minimal physical contact among students.” Check Also: Bihar Board 10th Result 2020: BSEB Matric Scrutiny From 29 May, Check How to Apply for Scrutiny

He also reiterated that the priority of the government and the schools would be to resume academic activities and classroom sessions, extracurricular activities, and events that can wait for now.

So, now the students in Bihar can hope to resume their classroom sessions soon and continue with their academics in the desired manner.