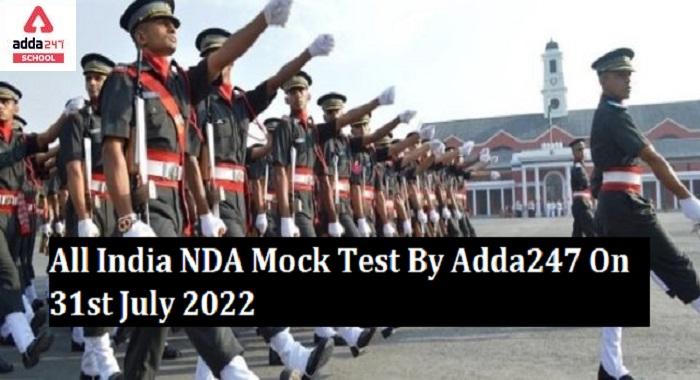 The exam pattern of the All India NDA Mock Test by Adda247 will be the same as NDA 2022. The NDA 2022 examination consists of two papers. In paper 1, 120 questions from mathematics will be asked. Paper 2 is the General Ability Test, where candidates will be examined on the subjects of gk, current, and science. Go through the exam pattern given below:

Types of matrices, operations on matrices, Determinant of a matrix, basic properties of determinants, Adjoint and inverse of a square matrix, Applications-Solution of a system of linear equations in two or three unknowns by Cramer’s rule and by Matrix Method.

Angles and their measures in degrees and in radians, Trigonometrical ratios, Trigonometric identities Sum and difference formulae, Multiple and Sub-multiple angles, Inverse trigonometric functions, Applications-Height and distance, properties of triangles.

This test will consist of 6 sections. Candidates will have to prepare the basics of all these sections for the UPSC NDA 2022 Exam. The sections are as follows:

Difference between the living and non-living. Basis of Life—Cells, Protoplasms and Tissues. Growth and Reproduction in Plants and Animals. Elementary knowledge of Human Body and its important organs. Common Epidemics, their causes and prevention. Food—Source of Energy for man. Constituents of food, Balanced Diet. The Solar System—Meteors and Comets, Eclipses. Achievements of Eminent Scientists.

The Earth, its shape and size. Latitudes and Longitudes, Concept of time. International Date Line. Movements of Earth and their effects. Origin of Earth. Rocks and their classification; Weathering—Mechanical and Chemical, Earthquakes and Volcanoes. Ocean Currents and Tides Atmosphere and its composition; Temperature and Atmospheric Pressure, Planetary Winds, Cyclones and Anti-cyclones; Humidity; Condensation and Precipitation; Types of Climate, Major Natural regions of the World. Regional Geography of India—Climate, Natural vegetation. Mineral and Power resources; location and distribution of agricultural and Industrial activities. Important Sea ports and main sea, land and air routes of India. Main items of Imports and Exports of India.

Knowledge of Important events that have happened in India in the recent years. Current important world events. Prominent personalities—both Indian and International including those connected with cultural activities and sports.

Q. When will the Union Public Service Commission conduct NDA 2022?