UP Police Jail Warder Exam Date 2020: The Uttar Pradesh Police Recruitment and Promotion Board (UPPRPB), Lucknow has released an official notice for the exam date for recruitment of Prison Warders, Fireman and Reserved Equestrian Police on 11th September 2020.

The UPPRPB Recruitment Notification for the above-mentioned posts was released in 2018. As per the notice, the written exam for the posts will be conducted on the 19th and 20th December 2020. Before this, a notice was released stating the exam to be held in the last week of November 2020 for a total of 5805 vacancies. However, as per the latest notice released by UP Police, the exam date has been confirmed to be conducted on  19th and 20th December 2020. The notice was released on the official site  @uppbpb.gov.in. 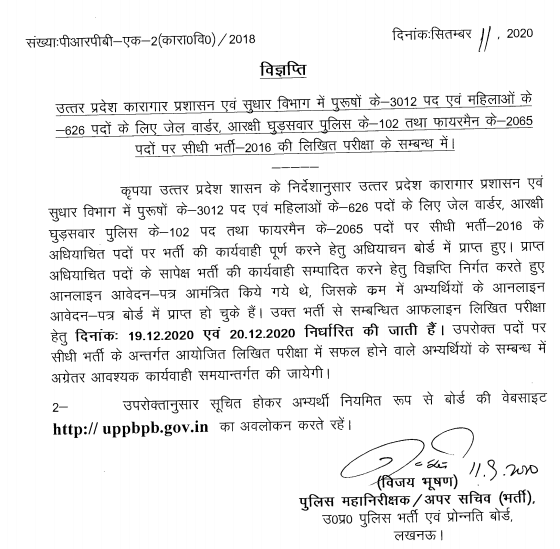 The total no. of vacancies is 5805. The vacancy distribution is as follows:

Selection for this recruitment of UP Police Fireman and Jail Warders will be held in 5 different stages.

Physical Test For UP Jail Warder and Fireman Recruitment

Physical test 4.8 km running will be completed for 200 marks. Candidates have to clear the 4.8 km running in less than 27 minutes. Mark allotment details will be given below.

For female candidates 2.4 kms running will be conducted for 200 marks. Candidates have to clear in less than 16 minutes.