SSC CHSL Recruitment 2020: The Staff Selection Commission or SSC is one of the leading Govt. Organizations that are responsible for providing employment to the candidates for the service of the nation. It conducts a no. of exam for the graduates, 12th Pass, and 10th Pass candidates annually. Each year over lakhs and lakhs of applications are filed online for the exams conducted by it. A job under the SSC provides better facilities, services in every aspect of our lives, and the development of our country.

Here we are discussing the Combined Higher Secondary Level (CHSL) for recruitment in various Ministries/ Departments/ Organizations of the Government of India. For this exam over 20 lakh applications are received each year. One aspect that makes it the highly coveted job opportunity is its educational qualification which is 12th Pass.

The posts for which the SSC CHSL Exam are as follows:

Update: The SSC has released the exam calendar for the SSC CHSL 2020 exam. Check the exam dates and notification dates of SSC CHSL 2020-21.

SSC has released a exam calendar with the revised exam date for leftover candidates and tier 2 exam. The commission has also released the notification dates of the SSC CHSL 2020 exam. Candidates can check the revised exam dates in the Calendar below. The new dates are also tentative, it may get changed depending on the situation at that time. The tier 1 exam is for remaining candidates is going to conduct from 12th to 26th October 2020. Candidates are advised to visit this page regularly for any updates. 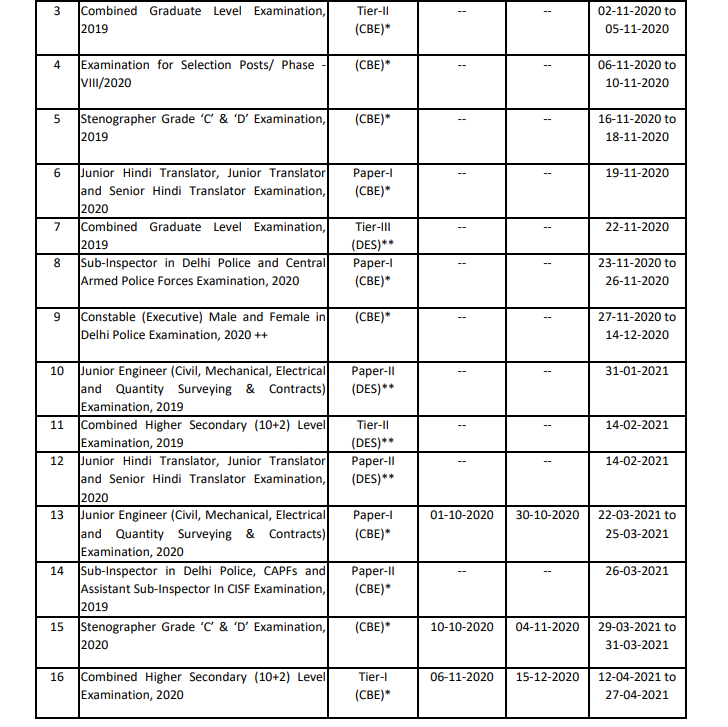 SSC CHSL 2020 notification will be out @ssc.nic.in. Staff Selection Commission (SSC) has been working day in, day out to adhere to its calendar since January 2019 for the post of Lower Divisional Clerk (LDC)/ Junior Secretariat Assistant (JSA), Postal Assistant/ Sorting Assistant (PA/SA) and Data Entry Operator(DEO) on 03rd December 2019.

After almost two years students are getting some ray of hope from the SSC. Candidates can check the notification details including eligibility, posts, exam dates & application form from the given paragraphs. SSC CHSL 2020 Notification includes details as officially released on the website. The notification PDF is available for which the link is provided. A few days ago, a newspaper clipping was released for confirmation of the CHSL date. Read on to find out.

The exam dates for SSC CHSL 2020 are released by SSC along with its official notification. Check all the Important Dates Here.

Candidates can also check the tentative SSC CHSL 2021 Important dates in the below table:

The total number of vacancies for SSC CHSL 2020 exam was released on 7th January 2020. For SSC CHSL 2019-20, 4893 vacancies hace been released. The Post wise vacancy are mentioned below:

All the aspiring candidates of SSC CHSL 2020 have to abide by all the Eligibility Criteria decided by the Commission.

Note: Candidates who areappearing in their 12th standard can also apply provided they produce the educational qualification and the documentary evidence from the board/ university as on January 1st, 2020

The Application Fee for SSC CHSL 2020 as per the categories is given below:

The exam pattern of SSC CHSL 2020 is explained in the tables below. SSC CHSL 2020 comprises of three Tiers. Tier-I is mainly screening exams and scoring also.

The SSC CHSL 2020 Tier I and Tier II are scheduled to be held from 16th to 27th March 2020 and 28th June 2020 respectively. The elaborated Exam Patterns of Tier I, Tier II, and Tier III of SSC CHSL 2020 Recruitment are given in the table below. It is important for candidates to know every bit of exam pattern to prepare well for every section of the examination.

Students must note down that Tier II is scoring and qualifying in nature while Tier III is only qualifying in nature. You have to do well in all the Tiers of the SSC CHSL Examination. Candidates can check the detailed exam pattern and Syllabus on our website by clicking on the link provided below.

SSC CHSL 2020 Tier I comprises four Sections/Subjects that are mentioned below:

Important things which you should keep with you while filling the Application Form:

SSC has released the new exam dates for the candidates of the CHSL exam, whose exam was not held due to COVID-19 coronavirus on 21st July 2020. Admit Card for the remaining candidates will be released in October 2020. The expected date is generally 10-15 days before the exam date, which means the tentative date could be October 2020.

To download the admit card for SSC CHSL you will need to have your SSC Registration no. and Password. Only after entering these two can you log in to obtain your admit card to appear for the SSC CHSL Tier I Exam 2020-21.

SSC will release the CHSL Answer Key after the Examination is over. The expected date is generally 10 days after the commencement of the exam, which means the tentative date could be towards the beginning of the August-September.

The PayScale for each of the posts is tabulated below for SSC CHSL 2020.

For your convenience, you can have a look at the previous year’s cut-off of the SSC CHSL Exam.

In the event of a tie in scores of candidates in Tier-I+Teir-II examinations, merit will be decided by applying the following criteria, one after another, till the tie is resolved: