IBPS RRB Syllabus is discussed in the article. The Institute of Banking Personnel Selection (IBPS) conducts it’s Regional Rural Banks (RRB) exam to select officers who will fill posts in nationalized rural banks across the country. The IBPS RRB exam promises a bright future for those who are embarking on their careers in banking.

The IBPS RRB Syllabus along with the exam pattern for the assistant post is discussed here.

Candidates can check the prelims and mains level exam pattern and syllabus in the tables below.

Each year lakhs and lakhs of bank exam aspirants apply for Bank Exam. The salary and scale that is offered in the IBPS RRB Clerk and Officer Scale is what tempts the candidates to apply for it. 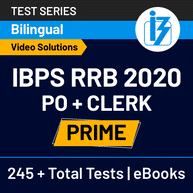 Now that we have discussed the detailed exam pattern of IBPS RRB Assistant Exam, let’s have a look at the IBPS RRB Officer Grade Exam Pattern.

The preliminary Exam is for only Scale I but the Mains Exam is for all Officer level posts, it differs a bit in terms of professional knowledge required to qualify this stage. The exact IBPS RRB Officer Grade Exam Pattern has been released with IBPS RRB Notification.

The IBPS RRB Officer Scale I Exam for Mains will be of a total of 200 marks of 2 hours. There will be a penalty of 0.25 marks for every incorrect answer.

There will be a single level exam for IBPS RRB Officer Scale-II Post. Selection will be made. Each candidate will be required to obtain a minimum score in each test of Online Single Examination to be considered to be shortlisted for interview.

Depending on the number of vacancies available, adequate number of candidates in each category not exceeding three times of the declared vacancies shall be called for interview, subject to availability. Prior to the completion of the interview process, scores obtained in the Online Main Examination will not be shared with the candidates shortlisted for interview.

*Candidates will have the option to opt for English or Hindi Language Paper.

In this section, we will discuss the Syllabus for IBPS RRB exam subject-wise. Candidates can check the IBPS RRB Syllabus in the tables given below.
The subjects covered in the syllabus are as follows:

The reasoning ability section comprises of logical and verbal reasoning. The topics for IBPS RRB reasoning syllabus are as follows:

The marks for the interview are 100. The minimum qualifying marks in the interview for Officers Scale, I, II and III will be as per extant guidelines. Only by qualifying both in the Online Examination (Main/Single) and Common Interview with sufficiently high marks will candidates be shortlisted for subsequent provisional allotment process, the details of which will be made available on the official IBPS website.

Q 1. For which posts can I apply for IBPS RRB Exam?
Ans. You can apply for the post of IBPS RRB Office Assistant (Multipurpose), Officer Scale I, II, and III. However, one can apply only for one post under Officer Scale.

Q 4. Is there a sectional cut-off in IBPS RRB Exam?
Ans. Yes, there is sectional cut off for the IBPS RRB exam for all the posts.