SSC CHSL 2018 Tier 2 Revised Result Out: SSC has released the result of the SSC CHSL Tier 2 exam for those candidates whose tier 2 answer sheet was rejected earlier due to Unfair Means (UFM). Many candidates who were rejected due to UFM had requested commission for revisiting the decision of disqualifying them. The commission has constituted an expert committee to check the claims of students. The committee had given a one-time exemption to 4559 candidates. Candidates can check the result and notice below. Candidates can check the option form link in the article. 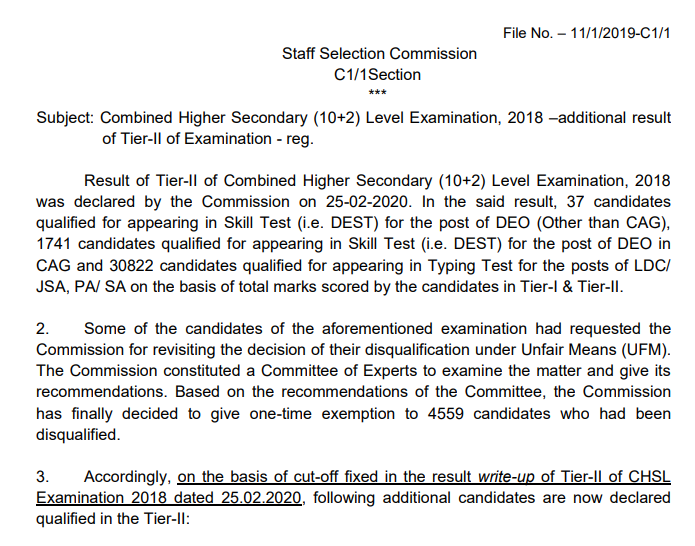 Staff Selection Commission has released SSC CHSL ( Combined Higher Secondary Level ) Tier 2 revised Result on 27th August 2020. It is good news for those whose sheets were rejected in the first place. The marks of the Paper-II will be included in the merit list of the SSC CHSL Examination. SSC conducts CHSL for the Post of Lower Division Clerk, Junior Secretariat Assistant, Postal Assistant, Data Entry Operator.

Candidates are requested to check their marks and match it with the cut off according to their respective category. This will be easier for the candidates to check their qualification for the next round. Qualified Candidates can now start preparing for the next round of the exam, i.e, skill test, and document verification.
Also, the upcoming notifications of the SSC CHSL Exam 2020 will be updated here.

Candidates can check the SSC CHSL Paper 2 result by clicking on the link once it is released by the commission.

SSC CHSL 2018 Tier-II Exam was held on 29th September 2019. Candidates clearing the First stage was Eligible for the second stage of the examination.