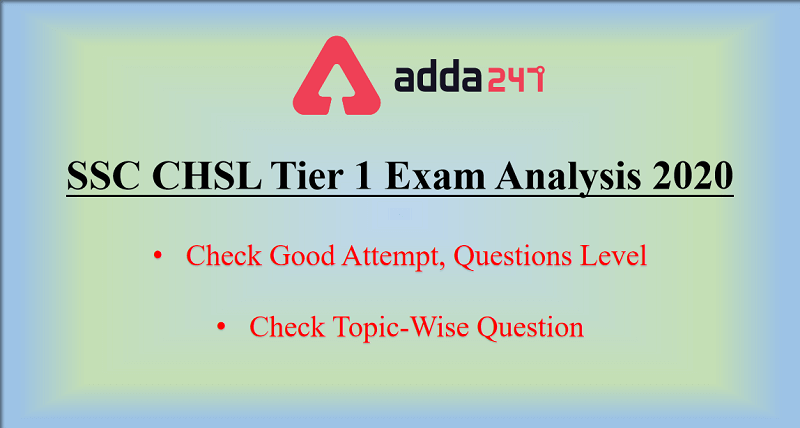 Here, we present to you the SSC CHSL Tier 1 Exam Analysis for 1st shift of 17th March. Candidates can check the Good Attempt, level of the question, subject-wise good attempt, level of the sections and Number of Questions asked from the topics in each subject/section. It is very helpful for those candidates who are going to appear in the subsequent shifts. After SSC CHSL Exam Analysis 2020 you can decide what to leave and what needs to be revised. Candidates can utilize their last minute to maximize the score in the SSC CHSL Tier 1 Exam. The analysis is prepared after taking inputs from the students from the exam center directly.

Looking at the CHSL Exam 1st shift, we can say the level of difficulty in the exam through the following pattern.

With the help of the exam analysis, andidates can check the Level of Exam, Types of Questions, Number of Questions from each topic, Subject wise analysis, Good Attempt. The Exam Analysis is given in the table below.

Candidates can check the exam review of each subject of SSC CHSL Tier 1 2020. There are four sections in the exam, namely English, Reasoning, Quantitative Aptitude, General Awareness. Based on the memory of the students, data collected by our students, we are providing you the section analysis of SSC CHSL Tier 1 2020. We will be updating the information from the feedback. Please go through the tables below to know the Exam analysis & review for each subject:

The Exam Analysis for the General Intelligence/ Reasoning section was easy-moderate. While Coding-Decoding, Analogy and Odd One Out questions were easy.

General Awareness yet again was Easy to Moderate  for CHSL, 1st Shift

Questions Asked for GA were more from January February 2020

Candidates can check the number of questions asked from each topic and the level of the question for these questions. The students have reviewed that the questions based on calculations were very less and comparatively very easy.

Questions Asked in Quantitative Aptitude: The level of questions today was very easy.

The antonym and synonyms asked were based on previous years.

Q 1. What is the Good Attempts for this exam?
The average number of good attempts can be considered from 78-83.

Q 4. How many sections are there for CHSL Tier 1 2020?
There are 4 sections in SSC CGL Tier 1 2020 i.e  English Language, Reasoning, Quantitative Aptitude and General Awareness.