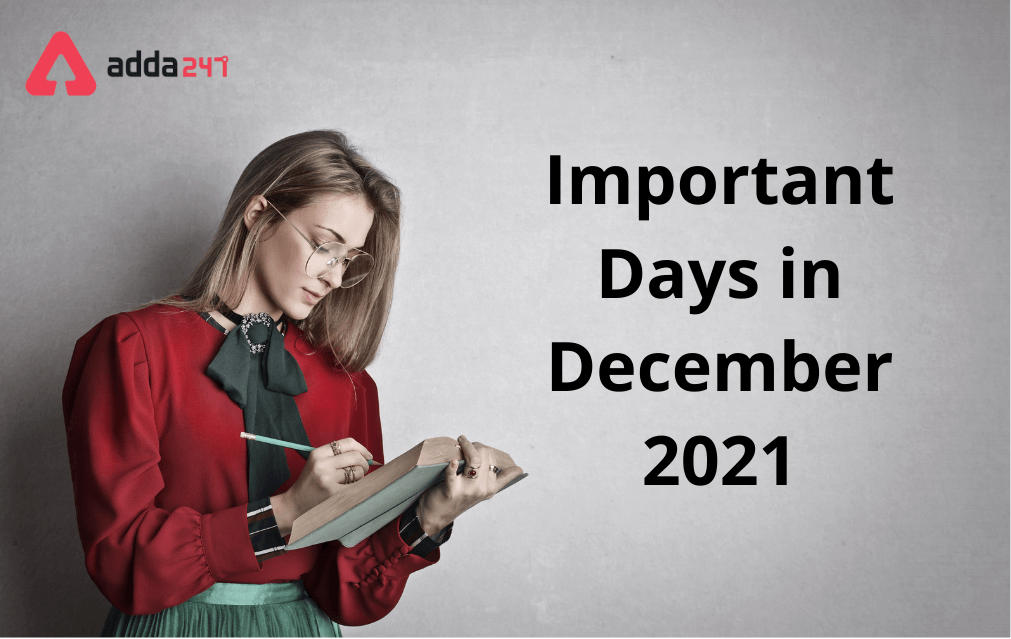 Important Days in December 2021: December is the last month of the year and this word is derived from the Latin word “Decem” which means 10. There are various important national and international events observed in this month like World AIDS Day, Indian Navy Day, World Soil Day, International Anti-Corruption Day, Human Rights Day, Christmas Day, and etc. Several competitive exams held by UPSC, SSC, Banking sectors and Railway Departments, such questions related to dates and events are asked in the General Knowledge/Awareness section. It is advised to every aspirant who are preparing especially for SSC CGL, SSC CHSL, SSC GD Constable, SSC MTS, RRB Group D, RRB NTPC Exams should go through this article as it will be helpful for them with their preparation. Adda247 has listed down all the important events in December 2021 in the below article.

The aspirants an refer to the below provided table for the list of Important Days in December 2021 along with the Dates and Events as it will be helpful with their competitive exam preparation.

List of Important Days and Dates in December 2021 – Significance

World AIDS Day is observed on 1st December every year to raise awareness and knowledge about HIV and a call to move toward ending the HIV epidemic. This event was first celebrated during 1988. Every year there is a theme organised during this event. In 2019 the theme was “Ending the HIV/AIDS Epidemic: Community by Community”. In this year the theme will be “Communities make the difference” as per UNAIDS.

2nd December every year is observed as the World Computer Literacy Day which aims at encouraging the development of technological skill and creating awareness and drive digital literacy in underserved communities worldwide. This is mainly celebrated among the children and women in India.

International Day of Abolition of Slavery is observed on 2nd December every year which aims to make people aware of the modern slavery that works against human rights. More than 40 million people in the whole world have become victims of modern slavery. This day reminds the situations of exploitation that a person cannot refuse due to threats, violence, coercion or abuse of power.

2nd December is also observed as the National Pollution Control Day every year. This day is celebrated in remembrance of those who lost their lives in the Bhopal Gas tragedy when the deadly gas methyl isocyanate leaked out of the Union Carbide plant on the intervening night of December.

International Day of People with Disabilities is observed on 3rd December every year to raise awareness about understanding and accepting people with disabilities. Every year a theme is organised to celebrate this day. In this year the theme will be “Leadership and participation of persons with disabilities toward an inclusive, accessible and sustainable post-COVID-19 world”.

International Volunteer Day is celebrated on 5th December every year. This day gives a chance to the volunteers and organizations to celebrate the efforts, the values and then promote their work accordingly among the communities, and etc.

5th December is observed as the World Soil Day to raise awareness about the importance of soil, healthy ecosystems and human well-being. As per Food and Agriculture Organization (FAO) campaign, there is a theme every year. In 2020 the theme was “Keep soil alive, protect soil biodiversity”.

Armed Forces Flag Day is observed on 7th December across the country every year. This day is celebrated by focusing over collecting funds from the common people and honour the martyrs and the men who fought with bravery on the borders to safeguard the country’s honour.

7th December is also observed as International Civil Aviation Day every year and this day is celebrated to raise awareness about its importance to the social and economic development of States and the role that ICAO plays in International air transport. Every year a theme is organised to celebrate this day. In 2020 the theme was “Advancing Innovation for Global Aviation Development”. 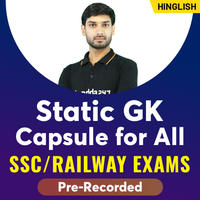 The International Day Anti-Corruption Day is observed every year on 9th December to highlight the role of key stakeholders and individuals in preventing and countering corruption in line with the theme of this year, “Your right, your role: say no to corruption”. Each week will focus on one of these key topics. Every year there is a new theme organized to celebrate this day in a unique manner.

On 10th December every year, Human Right Day is celebrated. The Universal Declaration of Human Rights was adopted in 1948 by the United Nations General Assembly. This day is observed to protect the fundamental human rights of all people and their basic human freedom.

On 11th December the International Mountain Day is celebrated every year to educate children and people about the role that mountains play in providing fresh water, clean energy, food, and recreation. There is theme organised every year to celebrate this day and the theme for this year is “Sustainable mountain tourism”.

11th December is observed as the UNICEF Day every year. The United Nations General Assembly created UNICEF on 11th December 1946, as the United Nations International Children’s Emergency Fund. The Theme for 2020 was related to focus on addressing the needs of children facing adversities due to the COVID pandemic across the globe.

14th December is observed as the National Energy Conservative Day which is celebrated to raise awareness about the need for energy and its conservation in daily life. During 1991, this day was celebrated by the Bureau of Energy Efficiency (BEE), under the Ministry of Power. This day is used to showcase the Nation’s contribution to energy conservation and steps taken towards becoming an energy-efficient nation.

Vijay Diwas is celebrated every year on 16th December in India. This day is celebrated to remember the martyrs, their sacrifices, and to strengthen the role of armed forces for the cause of the nation. It is also named as ‘Kargil Vijay Diwas’ to rekindle the pride and valour of the soldiers who took part in Operation Vijay. This day marks the victory of Indian soldiers in recapturing the mountain heights that were occupied by the Pakistani Army on 26th July 1999.

18th December is observed to reserve and promote the rights of minority communities in India and this day is celebrated as Minorities Rights Day in India. This day mainly focuses over the issues like the safety of minorities in the state. Several campaigns, seminars, and events are organised to inform and educate people about them on 18th December every year.

19 December is observed as Goa’s Liberation Day every year. During 19th December 1961, Goa was released from the Portuguese dominion after army operation and extended freedom movement. Hence, this day is celebrated in the commemoration of the Indian armed forces that helped Goa to receive their freedom from Portuguese rule.

International Human Solidarity Day is observed on 20th December every year. This day is celebrated to highlight the importance of unity in diversity. People remembers this day as it mainly focuses over the concept of working together in fighting against poverty, hunger, and disease.

National Consumer Rights Day is observed on 24th December every year which has a specific theme all around the country. The Consumer Protection Act, 1986 had received the assent of the president on this day. This day is considered as the historic milestone in the consumer movement in the country. 24th December is celebrated to increase awareness about consumer rights and responsibilities.

Good Governance Day (India) is observed on 25th December every year as it is the birth anniversary of former-Prime Minister Atal Bihari Vajpayee. His Samadhi namely ‘Sadiav Atal’ was dedicated to the nation and reflects his personality as a poet, humanist, statesman, and a great leader. The Good Governance Day was established in 25th December 2014 to pay tribute to the former PM Atal Bihari Vajpayee and also to raise awareness about the accountability in governance.

25th December is also celebrated as Chirstmas Day where people remember the birth of Jesus Christ, who Christians believe is the Son of God.  Chirstmas was derived from the word Chirst-Mass. The ‘Christ-Mass’ service was the only one that was allowed to take place after sunset and before sunrise the next day, hence people had it at Midnight. Since then Christ-Mass is shortened to Christmas.

New Year’s Eve is celebrated on 31st December every year as it is the last day of the year. On this day, people celebrate together in the evening and do dancing, eating, singing, etc. and welcome New Year with Joy.