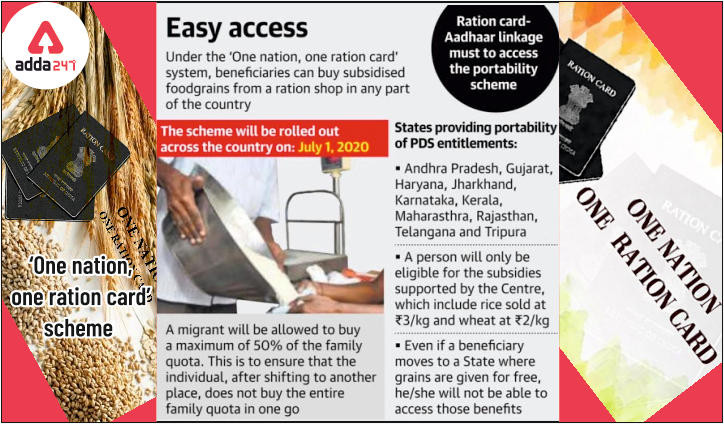 Finance Minister Nirmala Sitharaman on Thursday announced the national rollout of a ‘One Nation, One Ration Card’ system in all states and Union Territories by March 2021. As of now, about 20 states have come on board to implement the inter-state ration card portability.

According to the Finance Minister, this system will enable migrant workers and their family members to access PDS benefits from any Fair Price Shop in the country.Previously it was announced that all other States/UTs having attained requisite readiness for inter-State portability, shall be integrated in a phased manner.Thereby, enabling nation-wide portability of ration card holders to receive subsidized food grains under NFSA from anywhere in the country by 1st June 2020.

The Union Minister said that this initiative shall be very helpful for the large migratory population of the country who migrate from one part of the country to another in search of job/employment, marriage, or any other reason and find difficulty in accessing subsidized food grains in the present system.

What is the one ‘One Nation, One Ration Card’ system?

Under the National Food Security Act, 2013, about 81 crore persons are entitled to buy subsidized foodgrain — rice at Rs 3/kg, wheat at Rs 2/kg, and coarse grains at Re 1/kg — from their designated Fair Price Shops (FPS) of the Targeted Public Distribution System (TPDS).

Five more states, including Bihar and Uttar Pradesh, have been integrated with the ‘one nation, one ration card’ scheme.Bihar, UP, Punjab, Himachal Pradesh and Daman and Diu

However, the migration of the poor from rural areas to urban locations is more commonplace.Thus, geographical location is one of the hindrances that migrant workers face in order to claim their quote of grains and subsequently get denied their right to food.

To address the grim state of food security in the country and combat the problem of hunger, the government has started the ‘One Nation, One Ration Card’ facility.

About ‘one nation, one ration card’ scheme:

Under ‘one nation, one ration card’ system, the migratory ration cardholders will be able to get food grains from any Fair Price Shops (FPS) in the integrated 17 states & UT’s.They will be entitled to the subsidized food grains by using their existing ration cards issued in their own states or UT’s.

It will certainly help the migrant workers who have not been able to reach their hometown and have been stuck in different states at the time of the lockdown. ONORC will be particularly beneficial for women and other disadvantaged groups, given how social identity (caste, class and gender) and other contextual factors (including power relations) provide a strong backdrop in accessing PDS.

Standard format of ‘one nation, one ration card’:

A standard format for ration cards has been prepared after taking into account the format used by different states.For national portability, the state governments have been asked to issue the ration card in bi-lingual format, wherein besides the local language, the other language could be Hindi or English.

One nation, one ration card: It will give a cushion to migrant workers:

Recently the Supreme Court (SC), asked the Union government to examine the feasibility of implementing the “one nation one ration card” (ONORC) scheme during the national lockdown.

The scheme, which allows beneficiaries to access food grains that they are entitled to under the National Food Security Act, 2013, from any fair-price shop in the country, was announced last June.

The SC’s nudge to expedite the ONORC is critical. Millions of out-of-work migrant workers are stuck in host cities due to the lockdown.

Many have run out of money to buy food and don’t have a proof of identity like ration cards to access subsidised food grains via the well-stocked public distribution system (PDS).

States where they are stuck prefer offering relief to their own residents first, and cite the lack of identity documents to deny benefits.
And among those states which have opened community kitchens for out-of-job migrant workers, there have been complaints of the quantity, quality and type of food.Some feel that the ONORC scheme will not be of much help during the present crisis since many migrant workers have left their PDS cards in their villages.Instead, the Union government must expand the well-stocked PDS system to cover all individuals, irrespective of whether they have a ration card or not, for at least six months.Issues that need to be resolved are:

The digitisation of this PDS process, through Aadhaar-linked ration cards and smart cards, has been pushed in an effort to reduce leakages. However, there has been a rise of exclusion errors in post-Aadhaar seeding.There are many sections of society who still don’t have Aadhar Card, thereby depriving them of food security.

The fears of exclusion are also applied for migrant workers, as the fingerprints of people engaged in construction labour and domestic work may change or fade and may not match with the ones entered in Aadhar.There is no exact data on the mobility of poor households migrating to work, locating intra- and inter-state destinations and sectors employing the workers.

The current migrant crisis should be seen as an opportunity to develop a national migration policy addressing the challenges faced by migrant workers productivity, living conditions and social security.While this must be done, the government must also fast-track the ONORC scheme because India’s present rights-based regime is based on the assumption that people are sedentary.

This is not true given the high rates of inter- and intra-state migration. Without any safety net, migrants depend either on their employers or labour contractors for food provisions or purchase food in the open market.This increases their cost of living and reduces the additional earnings they might hope to remit to their families. During the lockdown, the crisis has become even more acute.

But even after the coronavirus pandemic is over, this will be useful. Migration is bound to restart because of unemployment.When migrant workers again start boarding trains and buses for the destination cities, they must have their PDS cards that are valid across India with them.