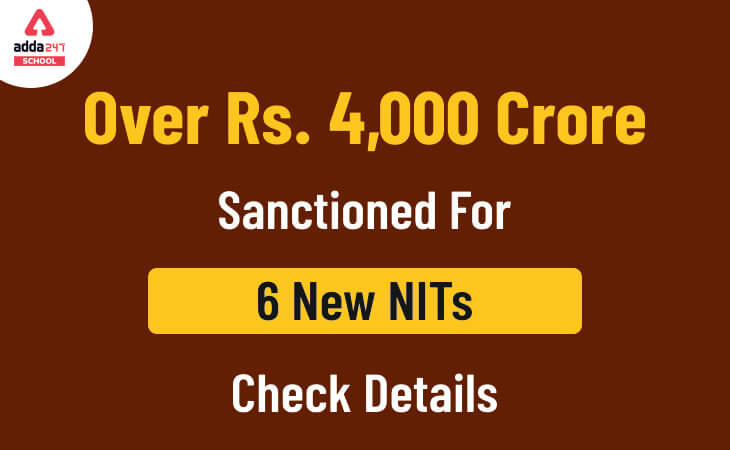 According to the latest announcements by the Union Human Resource Development Minister Ramesh Pokhriyal ‘Nishank’, on May 26, a sum of 4371.90 Crore was allocated for six new National Institutes of Technology or NITs by the Union Cabinet. These six NITs, of which four are in North East India and one each in Delhi and Puducherry which have been functioning as temporary structures from 2009 are supposedly expected to function fully from 2022 March 31, according to him. These NITs, for which the Minister has made revised cost estimates, are expected to have in all the six campuses and overall student capacity of 6,320 students.

“Government is committed to providing quality education and infrastructure improvement in educational institutions all over India and especially to the students of the North-Eastern states of the country,” said the Ministry of HRD in the press release as funds were sanctioned by the Union Cabinet in a meeting chaired by the Prime Minister Narendra Modi. These four North Eastern NITs are present in the states of Meghalaya, Nagaland, Arunachal Pradesh, and Mizoram. Check >> NEET 2020: How To Prepare For NEET Exam? NEET 2020 Study Plan And Preparation Strategy

The Development Of NITs To Be Fast-Tracked

At the time of establishment in 2009, the government had taken the initiative without sufficient funding for neither land nor for buildings. The Cabinet has approved 250 crores each for each of the Six NITs as a corrective measure for the same. “These NITs were established in the year 2009 and started functioning from academic year 2010-2011 in their respective temporary campus with very limited space and infrastructure.

The projects at the permanent campus could not be completed in the manner envisaged due to late finalization of land required for construction and also the cost approved for construction works was far below the actual requirements,” a statement from the government added. Check Also >> IIT JAM 2020: Admission Dates (Extended), Eligibility, Subjects, Pattern And Results

Mr Pokhriyal also took the occasion to share the information that the Sikkim University, the central university situated about 56 kilometres away from Gangtok, has been given a permanent campus by the government. “The government has granted permission for the establishment of a permanent campus of Sikkim University, at Yangyang, at the cost of Rs 986.47 crore,” the release by the HRD ministry read.

“The government of Sikkim has allotted 300 acres of land at the cost of Rs 15 crore, out of which 265.94 acres of land has already been handed over to the university. The handing over of remaining land is under process,” the HRD ministry release further added.

The Ministry also has decided to conduct a webinar on May 28, 2020, at 3 PM along with the National Assessment and Accreditation Council (NAAC) to find solutions for issues faced by college students in the lockdown.