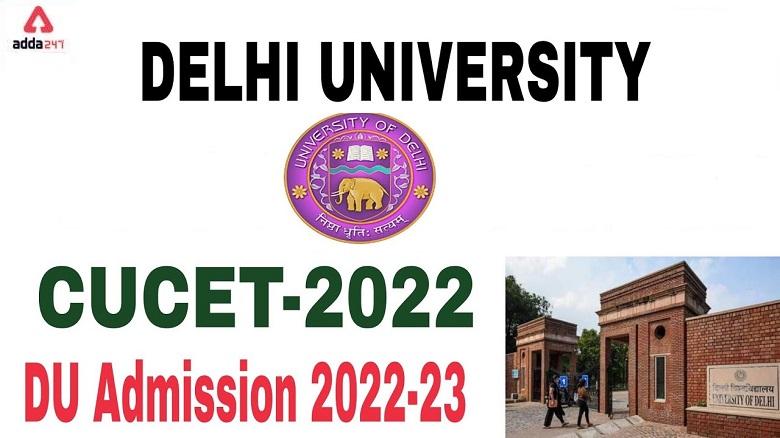 Yogesh Singh, Vice-Chancellor of the University of Delhi, announced that beginning this year, DU undergraduate (UG) admissions will be based on the Central Universities Common Entrance Test (CUCET), which will be administered by the National Testing Agency (NTA).

Yogesh Singh, the Vice-Chancellor of DU, had previously stated that the cut-off based admission system places students from the boards. He went on to say that the marking on the Boards is “strict,” which is a disadvantage. Currently, DU UG admission is based on candidates’ Class 12 grades; however, on December 10, the university’s academic council (AC) approved holding a common entrance test, based on the advice of a nine-member DU committee appointed by the DU Vice-Chancellor.

Initially, entrance to this university was based on merit for the majority of courses. Admission is based on the best of four grades/percentages in four subjects.

If you are pursuing a BA in Business Economics, BMS, or BBA (FIA), you must take the DU JAT test.

Both of these entrance criteria are planned to be combined with CUCET.

Let’s see what it looks like for the aspirants who wish to be a student at DU, the University of Delhi, also known as Delhi University.

Because of the high cut-offs for practically every course, admission to institutions in this city is extremely competitive, although the fees charged to students are extremely low. Students are put in top brands or with respectable pay, and their places are never jeopardised.

This is thought to be one of the reasons why NEP issued a draught stating that all central or state-level universities must admit students based on their achievement in an entrance exam, excluding the percentage-based admission to this University of Dreams.

The DU 2022 Application Form will be available online exclusively beginning the first week of June 2022.

What is the procedure for applying to DU?

With the publication of the DU application form 2022, interested students can access the DU admissions portal 2022 at admission.uod.ac.in online. By the last week of August, students will be able to complete their Delhi University registration procedure for 2022.

Is DU included in the CUCET?

Is the CUCET exam required for admission to DU?

All students seeking admission to all universities will be required to take the CUCET entrance exam.