Q1. Which items should be considered when looking at a site for a new transformer installation?
(a) Environmental impact
(b) Soil reports
(c) Site survey
(d) All of the above

Q2. The magnetizing inrush current in a transformer is rich in the………. harmonic.
(a) Second
(b) Third
(c) Fifth
(d) Seventh

Q4. Power transformers are generally designed to have maximum efficiency around
(a) No load
(b) Half load
(c) Near full load
(d) None of the above

Q5. A circuit is disconnected by isolators, when:
(a) Circuit breaker is not open
(b) Line is energized
(c) Line is on full load
(d) There is no current in the line

Q6. Determine the current through the 5Ω resistor in the figure given below utilizing Thevenin’s theorem.

S2. Ans.(a)
Sol. When an unloaded transformer is switched on, it draws a large initial magnetizing current which is also known as inrush current in which the second harmonic is more predominant.

S5. Ans.(d)
Sol. Isolators are used to open a circuit under no load.
Its main purpose is to isolate one portion of the circuit from the other and is not intended to be opened while current is flowing in the line. Isolators are generally used on both ends of the breaker so that repair or replacement of circuit breaker can be done without any danger. 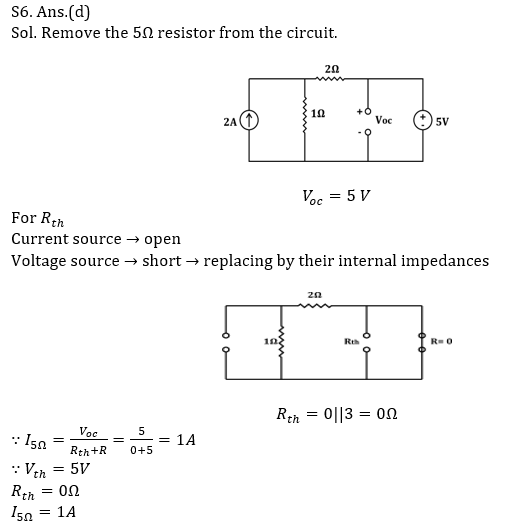