Q1. “Overshoot” in time response of control systems is an indication of:
(a) Final value of the output
(b) Measure of relative stability
(c) Steady-state solution
(d) None of the above

Q2. Find the current through 5 Ohm resistors from A to B. 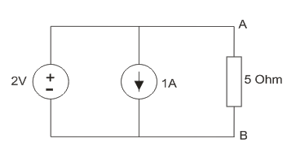 SOLUTIONS
S1. Ans.(b)
Sol. “Overshoot” in time response of control systems is an indication of relative stability.
Overshoot occurs when the transient values exceed the final value.
in its purest form, overshoot represents a distortion of a signal.
Overshoot often is associated with settling time, how long it takes for the output to reach a steady state.

S2. Ans.(c)
Sol. superposition theorem can be stated as if a number of voltage or current sources are acting in a linear network, the resulting current in any branch is the algebraic sum of all the currents that would be produced in it when each source acts alone while all the other independent sources are replaced by their internal resistances. (i.e., For voltage source short-circuited and for current source open-circuited.)
Applying Superposition theorem, current due to 2V source is 0.4A from A to B (i.e., 2/5=0.4 A) and current due to 1A source is zero from B to A as all current will flow through the shorted 2V source. So total current from A to B due to all the sources is 0.4A.