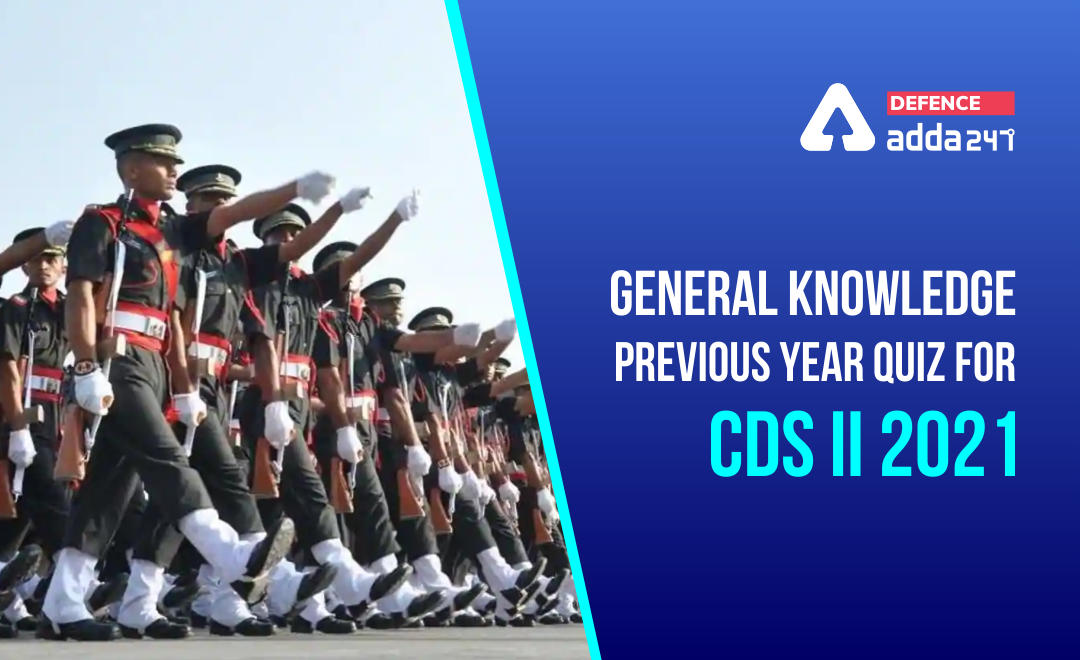 General Knowledge Daily Question Series for CDS II 2021: UPSC is going to conduct CDS II 2021 examination on 14th November 2021. Students who are preparing for this exam are always looking for good quality study material for practice. DefenceAdda Team is putting all efforts to bring you the best study material in order to boost up your preparation. Now, Aspirants you have less than 60 days to prepare for CDS 2021. Put in all your efforts to clear the exam. Here we are providing you the CDS GK Question Series for your practice.
General Knowledge section is a very crucial topic when it comes to clearing CDS Exam. One must prepare the topics carefully and in-depth if the target is to clear CDS. Regular practice is the only solution to clear the vast syllabus of the General Knowledge section. Therefore aspirants, you also need to practice as many questions as you can. To ace up your preparation, Defenceadda is providing you with CDS General Knowledge Previous Questions with answers with a motive to help you boost your preparation.

Q1. A ray of white light strikes the surface of an object. If all the colours are reflected the surface would appear

Q2. Motion of an oscillating liquid column in a U-tube is

(a) Periodic but not simple harmonic

(d) Simple harmonic and time period depends on the density of the liquid.

Q3. Dirty cloths containing grease and oil stains are cleaned by adding detergents to water. Stains are removed because detergent

(a) Reduces drastically the surface tension between water and oil

(b) Increases the surface tension between water and oil

(c) Increases the viscosity of water and oil

Q4. You are asked to job in a circular track of radius 35 m. Right one complete round on the circular track, your displacement and distance covered by you respectively

(a) The electric energy is completely converted into light

(c) The light energy is converted into electric energy

(d) The electric energy is converted into magnetic energy

Q6. In cricket match, while catching a fast moving ball, a fielder in the ground gradually pulls his hands backwards with the moving ball to reduce the velocity to zero. The act represents

(a) Newton’s first law of motion

(b) Newton’s second law of motion

(d) Law of conservation of energy

Q7. Two layers of a cloth of equal thickness provide warmer covering than a single layer of cloth with double the thickness. Why?

(a) Because of the air encapsulated between two layers

(b) Since effective thickness of two layers is more

(c) Fabric of the cloth plays the role

(d) Weaving of the cloth plays the role

Q8. A mobile phone charger is

Q9. No matter how far you stand from a mirror, your image appears erect. The mirror is likely to be

(a) Either plane or convex

Q10. The position, relative size and nature of the image formed by a concave lens for an object placed at infinity are respectively

(a) At focus, diminished and virtual

(b) At focus, diminished and real

(c) Between focus and optical center, diminished and virtual

(d) Between focus and optical center, magnified and real

Sol. When an object reflects all the colours of a white light, then it would appear white. White light is the combination of all seven colours (VIBGYOR) of light.

Sol. Motion of an oscillating liquid column in a U-tube is called simple harmonic motion with time period independent of on the density of the liquid.

Sol. One end of hairpin shaped detergents attracted to water and other to molecules of oil or grease that reduces drastically the surface tension between water and oil.

Distance travelled by you = 2 πr

(Circumference of the circular track)

Sol. When current flows through the filament of incandescent electric bulb, it gets heated up. Soon it becomes white hot and starts emitting light.

Sol. We know from Newton’s second law of motion

The greater the rate of change of momentum, the greater is the force and vice-versa.

Sol. Two layers of a cloth are warmer because air trapped between the layers acts as thermal insulator restricting the heat transfer.

Sol. Image formed by a plane and a convex mirror is always erect. Concave mirror forms image both erect and inverted depends on the position of the object from the mirror.

Sol. From the ray diagram, it is very clear that the image of the object placed at infinity from a concave lens is virtual diminished and at the focus of the lens.